SHLOYME LIPSHITS (SAM LIPSCHITZ) (February 10, 1910-September 14, 2000)
He was born in Radom, Poland.  His father ran a “cheder metukan” (improved religious elementary school).  He studied with his father, in a Polish high school, and privately, before becoming a laborer.  In 1927 he immigrated to Canada.  He first years there he worked as an assistant librarian in the Montreal Jewish Public Library, while at the same time studying at university.  Until 1956 he was a prominent leader in the Jewish and general Communist movement in Canada.  He was also (1944-1953) a leading activist in the Canadian Jewish Congress.  After the war he visited Poland, the state of Israel, the Communist satellite countries, and Western Europe.  In 1956 he visited the Soviet Union and returned from there disappointed in Communist politics and withdrew from the Communist Party of Canada; he wrote about this in the Yiddish and English press in Canada and the United States.  He debuted in print in Rademer-keltser lebn (Radom-Kielce life) in 1926; and until 1933 he published articles in: Keneder odler (Canadian eagle) in Montreal, Der idisher zhurnal (The Jewish journal) in Toronto, and elsewhere.  From 1933 he wrote for and edited: Der kamf (The struggle), Der veg (The way), and later for Vokhnblat (Weekly newspaper) in Toronto (1943-1956).  He also contributed to: Hamer (Hammer), Morgn-frayhayt (Morning freedom), Yidishe kultur (Jewish culture), and Eynikeyt (Unity)—in New York; Naye prese (New press) in Paris; and Folks-shtime (Voice of the people) in Warsaw.  He was editor of the English-language New Voice (1947-1949) in Toronto and an active contributor to Canadian Tribune—in Montreal.  After his split with the Communist movement, he went on to write for Keneder odler and Der idisher zhurnal, as well as Rademer shtime (Voice of Radom) in Toronto.  He was active in the printers’ union, in the association of those from Radom, and in the campaign for Histadrut.  He died in Toronto. 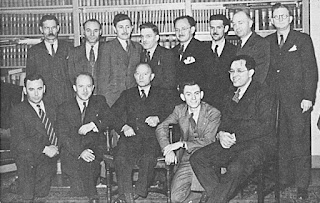