Does the rain have a father?—Job once asked.  Revolutionary zeal that burns so wondrously on the Jewish street surely has its fathers—the prophets, the midrashim, the great and ardent expectations for the Messiah.  One might certainly ask: Why did these same prophets and these same messianic expectations find no revolutionary expression on the Jewish street a hundred years ago, even a decade ago, and can offer interesting explanations for this.  However, without the prophets and without the anticipation of the Messiah’s coming, it would be very difficult to explain why, for example, in Minsk at one and the same time young Jewish cobblers were able to organize easily, and nothing at all was able to be done with the young gentile cobblers. 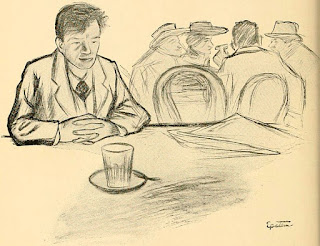 “Abraham Walt,” from Hutchins Hapgood,
The Spirit of the Ghetto

[1] Translator’s note. This is actually a line from the son “Der kremer” (The shopkeeper). (JAF)
Posted by Joshua Fogel at 07:32