KALMEN LIS (1903-August 19, 1942)
He was born in Kovel (Kovle), Volhynia, into a family that came there from village settlements.  He attended religious elementary school and a Polish high school.  He studied at senior high schools in Vilna and Warsaw, specializing in the education of children with special needs.  From 1937 he administered the Tsentos Institution for Special Needs Children in Otwock, near Warsaw.  While still in school himself, he debuted in print with poems in Vilner vokh (Vilna week) and Voliner prese (Volhynia press), among other Yiddish newspapers and publications in Volhynia.  His first longer poem—“Konyukhes” (Horse stable men)—quickly gained him recognition, thanks to its original Volhynian motifs.  In 1927 he moved to Warsaw, and for several years he belonged to the young writers who assembled around Vokhnshrift far literatur (Weekly writing for literature) and the Bundist daily Folkstsaytung (People’s newspaper).  In 1930 he joined the “leftist” writers’ group and became a contributor to its legal and illegal publications, but during the Moscow show trials in the Soviet Union in the 1930s, he left this group.  Lis published poetry, reviews, and literary-critical articles as well in: Yugnt-veker (Youth alarm), Foroys (Onward), Literarishe bleter (Literary leaves)—among other poems: “Volin” (Volhynia), “Marko” (Marko), “Yugnt” (Youth), “Shiml” (Mildew), and “Dos naye shtetl” (The new town)—Arbeter-tsaytung (Workers’ newspaper), Fraye yugnt (Free youth), Shriftn (Writings), Dos kind (The child), Der fraynd (The friend), and Oyfgang (Arise) (1928), among others—in Warsaw; Vilner tog (Vilna day), Yung-vilne (Young Vilna), Zibn teg (Seven days), and Kurts (Short), among others—in Vilna; Shtern (Star) and Lebn un kamf (Life and struggle), a collection of leftwing writers in Poland—in Minsk (1936).  His books include: Voliner shlyakhn (Volhynian battles) (Warsaw, 1930), 78 pp., poetry from his first period, including the poem “Der zeyde fun pravole” (Grandfather from Pravole); Vinter in dorf, fragmentn fun a poeme (Winter in a village, fragments of a poem) (Pietrkov, 1933), 16 pp.; Frilings vintn (Spring winds), poems on revolutionary motifs (Pietrkov, 1934), 48 pp.; Dos lid fun peter batrak, poeme fun di tsarishe tsaytn (The poem of Peter Batrak, a poem from Tsarist times) (Warsaw, 1935), 124 pp.; Kind un rind (One and all), poems of kindergarten and preschool (Warsaw: Shvalbn, 1936), 78 pp.; Erd un vayb (Land and wife), lyrical motifs and love poems (Moscow, 1937), 48 pp.; Der heyl-pedagogisher anshtalt “Tsentos” un zayn dertsiungs-sistem (The therapeutic-educational institution “Tsentos” and its educational method) (Warsaw, 1937), 48 pp.  He translated into verse form Alexander Pushkin’s A maysele vegn dem fisher un dem goldenem fishele (A tale of the fisherman and the little golden fish [original: Skazka o rybake i rybke]) (Warsaw: Kinder-fraynd, 1937), 16 pp.; and Fun pushkins lirik (From Pushkin’s lyric) (Warsaw: Shriftn, 1937-1938), 48 pp.  He was the editor of Lirik, poetisher byuletin (Lyric, poetic bulletin), vol. 1 Warsaw, 1938); co-editor (with Sh. Zaromb) of Dos ershte zamlbukh fun der moderner yidisher lirik (The first collection of the modern Yiddish lyric), an anthology of the modern Yiddish lyric throughout the entire world (Warsaw, summer 1939), set in type but not published because of the war; the same for his books, Farneplte randn (Hazy edges) and Tsugast bay der velt (Visitor in the world), poems from the years 1937-1939, and Antologye fun voliner dikhter (Anthology of Volhynian poets), which was awarded the Y. L. Perets Prize for young poets from the Yiddish Pen Center in Warsaw in 1939.
On September 1, 1939, the first day of the German invasion of Poland, at the time of the bombing of the Tsentos Institution in Otwock, Lis was wounded in his feet, and for a lengthy period of time he was recuperating in a Warsaw hospital; he then returned to Otwock and went on to run the institution for special needs children until August 16, 1942, when the Germans attacked the institution and shot the children.  Lis succeeded in escaping and hiding with a peasant, but the Nazis discovered his hiding place, and on August 19 seized and shot him on the spot.  After the war, in the underground Warsaw archive that was unearthed were poems by Lis—“Vos shvaygstu, velt” (Why are you silent, world), “Barg-motiv” (Mountain motif), and “A briv mit an entfer” (A letter with an answer)—which convey the mood of the poet with the background of the tragic Nazi reality.  A portion of the poems in Lis’s literary heritage are included in the anthology Dos lid iz geboyrn (The poem is born) (Warsaw, 1951), pp. 110-26, and in Pinkes kovel (Records of Kovel) (Buenos Aires, 1951), pp. 215-20 (there is also a poem here, dedicated to his memory, by his fellow Kovel native, Kehat Kliger). 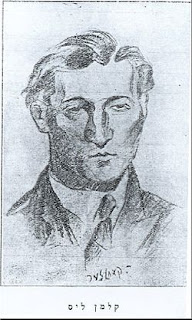