IZIDOR LILYEN (ISIDORE LILLIAN) (September 7, 1882-August 26, 1960)
He was born in Reyshe (Rzeszów), eastern Galicia.  At age ten he immigrated to the United States, and at age sixteen he joined a drama group; one year later, he was working in a Yiddish vaudeville house, where he excelled not only as an artist but also as an author of one- and three-act sketches, for which he also wrote songs himself—so-called “lyrics.”  Of his theatrical pieces, the following were staged: Dos shtif-kind fun der velt (The stepchild of the world) (1919); Zayn tatens vayb (His father’s wife) (1920); Der rebe hot geheysen fraylikh zayn (The rebbe ordered [them, us] to be happy) (1921); and Galitsyaner un litvakes (Galitsianers and Lithuanians) (1923); among others.  He also composed an allegorical satire of Yiddish theatrical life in two acts, entitled “Teater-aynname un oygabe” (Theater revenues and publications).  And, he composed the music to his plays.  He was co-director of the Lillian’s Lyric Theatre in Williamsburg, New York.  In his last years, he was living in the Jewish Home for the Blind in Yonkers, New York, where he died. 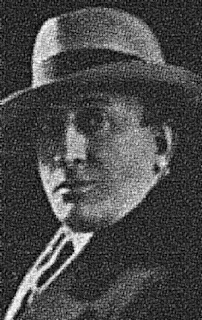