YISROEL LEYZEROVITSH (IZRAEL LEJZEROWICZ) (November 6, 1902-summer 1944)
He was born in Lodz, Poland, the son of a tailor.  In his youth he had a bad fall and remained a cripple his entire life.  He attended in religious primary school and public school.  For a time he studied painting in the Berlin art academy.  He was a member of the Lodz Jewish writers’ and painters’ group, which brought out the periodical Toyz royt (Red Trump) (Lodz, 1922-1923), and there he debuted in print poems and drawings.  He later published poetry, “painting-like compositions in words,” and articles about painting in: Vegn (About) in 1923 and Shveln (Thresholds) in 1924-1925—both in Lodz; Der fraytik (Friday) in Lodz-Warsaw (1924-1925); Nayer folksblat (New people’s newspaper) (1923-1939) in Lodz; Lodzer tageblat (Lodz daily newspaper) in the late 1920s; and Ekstrablat (Extra newspaper) (1926-1927) in Lodz.  In the Lodz ghetto he was part of Miriam Ulyanover’s literary circle, wrote poetry and satires of the ghetto leaders, and painted on apocalyptic themes.  In 1943 the Nazis deported him to Auschwitz and murdered him there.  In 1946 a batch of his paintings and writings were unearthed in a cellar; they were wrapped in canvas and bore the inscription: “Let us immortalize the beauty of dying, for we no longer possess anything else.” 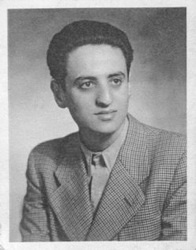