AVROM LIS (b. May 1913)
He was born in Bialystok, Russian Poland.  He graduated from the local Hebrew high school.  He cofounded (in 1933) the Jewish Cultural Association in Bialystok.  For several years he served as administrator of the Yehoash Reading Room of the Yiddish Writers’ and Journalists’ Circle there.  He debuted in print in 1935 in Bialystok’s Unzer lebn (Our life), edited by Peysekh Kaplan, with a treatment of the artist and woodcutter A. Kharif.  In 1936 he made aliya to Israel, where his parents, two sisters, and his extended family were living, having settled there years before.  Lis wrote, primarily literary-critical articles and essays, in: Unzer lebn and Yidish tsaytung (Jewish newspaper) in Bialystok; Di prese (The press) and Der shpigl (The mirror) in Buenos Aires; Tint un feder (Ink and pen) in Toronto; Yidishe kultur (Jewish culture) in New York; Kiem (Existence) in Paris; Dorem-afrike (South Africa) in Johannesburg; Byalistoker shtime (Voice of Bialystok) in New York; Nay velt (New world), Letste nayes (Latest news), Goldene keyt (Golden chain), Undzer haynt (Our today), Bleter (Pages), Undzers (Ours), Shtamen (Tribes), Yisroel-shriftn (Israeli writings), Al hamishmar (On guard), and Yeda am (Folklore), among others, in Israel.  He co-edited: Bleter far literatur un kritik (Pages of literature and criticism), published by the Jewish Writers’ and Journalists’ Club of Israel (Tel Aviv, 1941-1944); the collection Undzers (Tel Aviv, 1941); and together with A. Rives, the anthology Undzers (Tel Aviv, 1949).  Over the years 1952-1954, he served as editor of the literary page of the weekly newspaper Undzer haynt in Tel Aviv.  From 1938 with short breaks, he was a member of the presidium of Jewish Writers’ and Journalists’ Club (later, Union).  He was cofounder of the Sholem-Aleykhem Cultural Association in Israel, chairman of the Friends of YIVO in Israel, and initiator and contributor to a series of campaigns to fight for the rights of Yiddish in Israel, and he also composed a great number of articles on the subject.  With the establishment of the Yiddish Hour on Israeli radio, Lis contributed to programs of “Kol Yisroel” (Voice of Israel) with conversations about modern Yiddish and Hebrew literature.  Over the years 1949-1952, he led discussions entitled “Israeli motifs in Yiddish literature” (later also in the general Hebrew-language program).  Later still he ran the programs: “Shrayber un verk” (Writers and works), “In der yidisher velt” (In the Yiddish world), and “Gest baym mikrofon” (Guests at the microphone).  He also took part in the Hebrew program “Yalkut lesifrut” (Literary magazine) with reports on events in Yiddish literature and culture in the Diaspora.  In 1960 Lis’s book Heym un doyer, vegn shrayber un verk (Home and duration, on writers and work) (Tel Aviv: Y. L. Perets Library), 333 pp., appeared—a number of essays on Yiddish and Hebrew writers, mainly those who lived or were then living in Israel.  Subsequent books include: In skhus fun vort (By virtue of the word) (Tel Aviv, 1969), 331 pp.; In der mekhitse fun shafer (In the compartment of creating) (Tel Aviv, 1978), 270 pp.; Shmuesn biktav (Conversations in writing) (Tel Aviv, 1985), 240 pp.  He edited: Dr. y. rubin-rivkai, opshatsungen un zikhroynes (Dr. Y. Rubin-Rivkai, appreciations and memoirs) (Tel Aviv, 1963), 107 pp.; Zalman shazer, nasi vesofer (Zalman Shazar, president and writer) (Tel Aviv, 1969), 267 pp.; Sefer Reuven rubinshteyn (Reuven Rubinstein volume) (Tel Aviv, 1971), 302 pp.—all in Hebrew and Yiddish.  He prepared for publication: Opshatsungen un eseyen (Appreciations and essays) by Zalman Shazar (Tel Aviv, 1976), 220 pp.  Lis was part of the important force behind writing in Yiddish in the state of Israel.  He visited the United States in 1962, making a trip across the country on assignment for YIVO and preparing a report for the annual YIVO conference in New York.  He was last living in Tel Aviv.  In 1980 he received the prime minister’s prize, and in 1984 the Atran Prize. 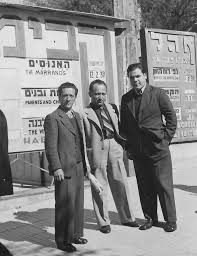 Lis on the far right