KHONE (CHONE) GOTESFELD (May 15, 1890-January 27, 1964)
Born in Skala, near Zbarazh, Galicia, he studied in religious primary school, synagogue study hall, and in a secular high school in Czernowitz.  From 1908 he was living in the United States.  Initially he worked in a sweatshop and in a newspaper office.  He lived in Cleveland and Philadelphia.  He settled in New York at the end of 1910, where together with Uzial Flayshman, he ran a candy store.  He later worked as a telephone boy for the Forverts (Forward).  In 1914, Abraham Kahan brought him onto the editorial staff of the newspaper, and there he worked for the remainder of his career.  He made trips to Europe and Israel.  In 1953 he was the president of the Jewish Writers’ Association in New York.  He began writing humorous sketches under the pen name Tuvye Shmeykhl for Yankev Fefer’s Vokhnblat (Weekly newspaper), Kundes (Prankster), and for provincial Yiddish newspapers.  He worked on the editorial board of Idishe velt (Jewish world) in Philadelphia and was the author of a number of plays which were staged in the Yiddish theater around the world.  In 1920, together with M. Osherovitsh, he wrote a drama entitled Yo farheyrat, nisht farheyrat (Married yes, married no), in which Rudolph Schildkraut performed.  In 1922 he wrote the comedy Raykhe kaptsonim (Rich paupers) which was later performed under the name Galitsyaner milyonern (Galician millionaires).  In 1924 Maurice Schwartz in New York and the Yiddish theater “Tsentral” (Central) in Warsaw staged his comedy of life in the Yiddish theater Gevald, ven shtarbt er? (Heavens, when will he die?), published in Vilna in 1926, 116 pp.; his novella “Ven shtarbt er?” was translated into German by Roda-Roda and published in the journal Jugend (Youth) (Berlin, 1926).  He also wrote the following comedies: Parnose (Livelihood), staged in 1928 by the Vilna Troupe and revived in New York in 1955; Amerikaner khsidim (American Hassidim), 1928; Malokhim af der erd (Angels on Earth), 1929; Plezhur (Pleasure), 1932; Punkt farkert (Just the opposite), 1932; and Mekhutonim (Relations by marriage), 1936.  In his comedies, which bordered on farce, there was a light humorous manner that offered insight into and images of American Jewish life.  He was also the author of: Mayn rayze iber galitsye (My journey through Galicia) (New York, 1937), 199 pp.; Abi men lebt, humoreskes (As long as one lives, humorous sketches) (New York, 1948), 270 pp.; and Fun brodvey un tel-aviv (From Broadway and Tel Aviv) (New York, 1951), 320 pp.; Vos ikh gedenk fun mayn leyn (What I remember of my life) (New York-Buenos Aires, 1960), 595 pp.  He also edited the yearbook Der galitsyaner (The Galician) (New York, 1939).

Over a number of years, Gotesfeld was the news editor for the Forverts, and for many years he edited “Dos shtif-kind” (The stepchild), the humor page of the Forverts.  He composed a series of humorous pieces for the newspaper, and therewith acquired considerable popularity among its readership.  Most recently, he published a series of impressions entitled “Afn himl a yarid” (A fair in heaven), in which he articulated events of current times as reflected through a prism of humor.  He was living in New York.  On January 25, 1958, he began to publish his memoirs in the Forverts under the title “Vos ikh gedenk fun mayn lebn” (What I remember of my life). [N.B. Published in New York with that same title in 1960, 596 pp.; English translation by Jacob Richman: Tales of the Old World and the New (New York, 1964)—JAF.] 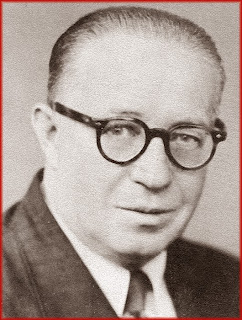