LAZAR (ŁAZAR) FUKS (February 5, 1892-January 30, 1935)
The husband of Tanye (Tania) Fuks, he was born in Modyev, Volhynia.  He received both a Jewish and a general education.  He studied mathematics and law at Warsaw University.  From 1904 he was living in Lodz.  He was active in the left Labor Zionist party.  In 1916 he cofounded the “Jewish School and Public Education Association,” and he directed the people’s university.  He created the secular Jewish school curriculum in Lodz, and he was the author of problems for subjects in Jewish schools.  At the time of the German occupation (1915-1918), he frequently appeared as a lecturer.  He lived, 1919-1920, in Moscow, before returning to Lodz.  In 1922 he was a candidate for the left Labor Zionists in the Polish Sejm.  From 1927 until his death, he was a member of the central council of the Yiddish provincial press in Poland.  His journalistic activities began with Nayer lodzher morgenblat (New Lodz morning newspaper) in 1913-1914.  He later contributed political articles, translations, and treatments of pedagogical issues and Jewish cultural matters to: Lodzer folksblat (Lodz people’s newspaper), Nayer folksblat (New people’s newspaper) of which he was co-editor, and Arbeter tsaytung (Workers’ newspaper) in Warsaw; and Emes (Truth) in Moscow; among others.  He also published under the pen name: L. Brant.  He died in Lodz. 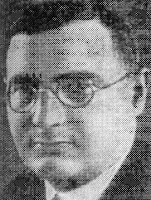