He was a poet, prose author, playwright, essayist, and translator, born in Uman (Uman'), Kiev district, Ukraine. His paternal grandfather was a ritual slaughterer, and his maternal grandfather an itinerant schoolteacher. Fininberg studied in a “cheder metukan” (reformed religious elementary school), where for speaking Yiddish one would get smacked. At age fourteen he was already well-read in Hebrew, Yiddish, and Russian, as well as in European literature. In 1917 he was a cofounder of the Zionist socialist organization (later, known as Fareynikte, or United [socialist parties]) in Uman. He remained a teacher until 1922. From 1923 he became completely dedicated to literature, having begun to write at the age of twelve in Hebrew. He later switched to both Russian and Yiddish. In 1917 he debuted in print in the Russian provincial press. From 1920 he lived mainly in Kiev, and there, together with Moyshe Khashtshevatski, he edited for a short period of time Litbletl (Literary pages), a weekly supplement to the newspaper Komfon (Communist banner). His first collection of poetry, Otem (Breath) (1922), was very warmly received by Yiddish critics in the Soviet Union, who remarked on his flaming temperament and fine workmanship. His second collection, Lider (Poems) (1925), further fortified his place as one of the best young representatives of contemporary Soviet Yiddish poetry, both because of his form and because of his motifs, mainly those of the shtetl and conditions in light of the new social spirit and also motifs based on the great events of the time. The 1926 publication of his story Galop (Gallop) demonstrated that he was also a highly talented prose writer. In these years the principal themes of his works were the civil war, the pogroms against the Jews, and the shtetl in the first years of Soviet authority. For his despairing pogrom motifs and for his inclination toward symbolism, he took a beating from the vulgar sociological critics. Fininberg was a member of the Kiev writers’ group Vidervuks (Renaissance) and later of the group “Antene” (Antenna), also in Kiev, and he was one of the initiators (together with Nokhum Oyslender, Lipe Reznik, and others) of the literary association “Boy” (Construction), which he cofounded in Kiev in 1925, as well as secretary and a member of the editorial board of the journal Di royte velt (The red world). In his play Yungen (Youth), staged at the time of the tenth anniversary of the October Revolution at the Kiev Yiddish State Theater, he dramatized a series of moments from the Russian Revolution, beginning in the year 1905. Aside from articles, translations, and reviews (using such pen names as H. Soyfer, Fin, F. Shtiler, and A. Miramin), in subsequent years he published poems, essays, prose works, stories, translations, and dramas in such anthologies, almanacs, and periodicals as: Shtern (Star), Di royte velt, Freyd (Joy), Shlakhtn (Battles), Ukrayine (Ukraine), Farmest (Competition), Af barikadn (At the barricades), and In fayerdikn doyer, zamlung fun revolutsyonere lirik, in di nayer yidisher dikhtung (In fiery duration, a collection of revolutionary lyrics in the new Yiddish poetry) (Kiev: State Publ., 1921), among others, in Kiev and Kharkov; Pyoner (Pioneer), Komyug (Communist youth), Farn heymland (For the homeland), In shlakht (In battle), Yungvald (Young forest), Far der bine (For the stage), Sovetishe dikhtung (Soviet poetry), Shtrom (Current), Deklamatsye far der sovetisher literatur (Declamation for Soviet literature), Tsum zig (To victory) (Moscow: Emes, 1944), Heymland (Homeland), and Emes (Truth), in Moscow. He also co-edited a variety of anthologies. Together with N. Oyslender, Noyekh Lurye, and others, he put together a reader of Yiddish literature for school use. His articles concerned such writers as Sholem-Aleichem, Yoysef Bovshover, Henekh Shvedik, and others. Following the Nazi Germany’s invasion of the Soviet Union, he volunteered to be mobilized into the Soviet army, took part in battles on various fronts against the Germans, and was severely wounded. He died in Moscow from the wounds received at the front within a year of victory in the war. 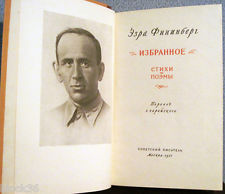 Fininberg in a volume of his poetry in Russian