YOYSEF LEFTVITSH (JOSEPH LEFTWICH) (September 20, 1892-February 28, 1983)
The pen name of Y. Lefkovitsh, he was born in the town of Zutfen, Holland.  He moved with his parents to London in 1899.  He studied in religious elementary school, and he acquired a secular education at a London school.  Soon after his bar mitzvah, though, he was forced to find work.  He was an errand boy, an apprentice to a tailor, and later for several years an apprentice to a dyer of fur coats.  In his youth he became acquainted with the Jewish socialist movement in London’s Whitechapel.  He began writing in Yiddish for Idisher zhurnal (Jewish journal) in London (1913-1914), edited by S. Dingol, and later he was an internal contributor to the London Yiddish daily newspaper Di tsayt (The times); later still, he and Leo Kenig edited Renesans (Renaissance), a monthly for literature and art.  In 1925 he was secretary of the Labor Zionist world bureau in London.  In 1921 he was the London editor of Meyer Grossman’s Jewish Correspondence Bureau (later, ITA [Jewish Telegraphic Agency]), where he worked until 1936.  As a former student of and secretary for Israel Zangwill, he contributed a great deal toward popularizing Zangwill’s literary works, and he translated into Yiddish Zangwill’s stories.  He also wrote critical treatments of Yiddish writers and their works and published them in the Yiddish and Anglo-Jewish press.  He earned especially great distinction for his translations from Yiddish poetry and prose into English.  Leftwich brought out two large English anthologies: Yisröel, the First Jewish Omnibus (London, 1933), 1065 pp. (there was also an American edition with the same title: New York, 1952, 723 pp.)—a collection of stories by Yiddish and Hebrew prose writers, as well as Jewish writers who wrote in non-Jewish languages; and The Golden Peacock: An Anthology of Yiddish Poetry (London, 1939), 910 pp., which includes poetry by Yiddish poets, which Leftwich himself translated into English, together with biographical sketches.  Both anthologies had prefaces on the value of modern Yiddish literature.  Leftwich was for many years a contributor to the Jewish Chronicle in London, and the London correspondent for South African Jewish Times in Johannesburg and for Yediot aḥaranot (Latest news) in Tel Aviv, in which he published articles and essays on Yiddish literature and Yiddish writers.  He also frequently published in Fraye arbeter-shtime (Free voice of labor) in New York and other newspapers and journals.  For Sholem-Aleykhem Year [1959, the centenary of his birth], he published an article on Sholem-Aleykhem in Unesco Courier (Match 1960).  He also authored an article on Yiddish literature in Chamber’s Encyclopedia (1953).  In 1938 as a private instructor, he gave a series of lectures on Yiddish literature at the University of London.  He was the director of the United Jewish Relief Institutions in London from 1945 and a representative of the cultural association Ben-Ari.  He was a leader of ORT (Association for the Promotion of Skilled Trades), TOZ (Towarzystwo Ochrony Zdrowia [Society for the protection of health]), and a collaborator with the London branch of YIVO (Yidisher Visnshaftlekher Institut) since its founding in Vilna.  When Zalmen Reyzen in 1931 on behalf of YIVO visited London, Leftwich, as the legal guardian of the legacy of Dr. Theodor Herzl’s son, Hans Herzl, who had died tragically, was the intermediary to receive for YIVO the manuscript of Dr. Herzl’s hitherto unknown diary from his student years.  Leftwich was also the permanent delegate of the New York Yiddish PEN Club, with a place on the international executive committee of PEN, and he had already on several occasions appeared at international PEN congresses, as the representative for Yiddish literature.  His books include: What Will Happen to the Jews? (London, 1936), 268 pp.; Along the Years, Poems 1911-37 (London, 1937), 148 pp.; with Josef Fraenkel, Theodor Herzl: The Man and the Legend (London, 1944), 46 pp.; with Professor Solomon Birnbaum, Yiddish Language and Literature (London, 1944); with A. K. Chesterton, The Tragedy of Antisemitism (London, 1948), 296 pp.; Israel Zangwill (New York, 1957), 306 pp.; Years Following After, Poems (London, 1959), 167 pp.  He also translated Rudolf Rocker’s autobiography, The London Years (London, 1956), with his own introduction.  He also contributed to a number of English-language encyclopedias, such as: Encyclopedia Britannica Yearbooks, Vallentine’s Jewish Encyclopedia, Chamber’s Encyclopedia, and American Jewish Yearbook.  He translated a large number of stories by Y. L. Perets which appeared in The Book of Fire (New York, 1960), 448 pp.  A new edition of The Golden Peacock (New York, 1961), 722 pp., also appeared.  He contributed to the almanac Yidish (Yiddish), published by the World Jewish Congress (New York, 1961).  He died in London. 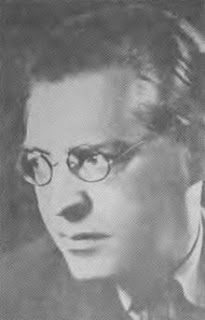