YONTEF LEVINSKI (YOM-TOV LEWINSKI) (July 28, 1899-1973)
He was born in Zambrow, Lomzhe district, Russian Poland.  His father Yisroel, a Russian-Hebrew teacher, had in his youth been active in Vilna’s “Zhargonisher komitet” (Zhargon [= Yiddish] committee) together with his yeshiva friend Khayim-Yankev Helfand (A. Litvak), and he was one of the first Bundists, but later he moved over to the Zionist camp.  In 1918 Yontef Levinski was a student at the Polish state seminary for Jewish religious studies in Warsaw.  During the Russo-Polish war of 1919-1920, he was an educational speaker in the first division of the Polish Legions.  He later enrolled in the Vilna teachers’ course of Tarbut.  He studied at the University of Liège (Belgium) and in 1935 received his doctoral degree for a dissertation on the Hittites according to Jewish sources and in light of archeology.  He began writing in Hebrew for the weekly Haḥaluts (The pioneer) in Warsaw in 1919, and in Yiddish in 1923-1924 with a series of articles in Vilner tog (Vilna day) on the topic of “Paraleln tsvishn der grikhisher komedye un yidishe kvaln” (Parallels between Greek comedy and Jewish sources).  He served as: editor (1925-1927) of the weekly newspaper Yidishe prese (Jewish press) in Antwerp; of the Belgian supplement to Parizer haynt (Paris today) (1929-1930); and of the weekly Yidishe tsaytung (Jewish newspaper) in Antwerp (1929-1930).  He helped to found Der belgisher tog (The Belgian day), the first Yiddish daily in Belgium, and edited it (1930-1931).  He specialized in Jewish cultural history and folklore.  In 1935 he made aliya to Israel.  For twelve years he taught literature, Tanakh, Talmud, and history at a high school.  In 1944 he worked as editor of the Devir publishing house.  He edited five volumes of the new series Reshumot (official gazette of the Israeli government), anthologies of folklore and ethnography, and the seven-volume series “Moadim” (Festivals) about the Jewish holidays, days or remembrance, fasts, and other topics from Biblical times to the Independence Day of the state of Israel’s.  He edited Sefer zikaron lekehilat lomza (Remembrance volume for the community of Lomzhe) (Tel Aviv, 1952), 375 split pages (which later appeared in a Yiddish translation by Y. Brukhanski [New York, 1957], 370 pp.).  He edited the folklore journal Yeda am (Folklore), the only serial of its kind in the Jewish world, with numerous folkloric materials from the Jewish linguistic sphere.  He was co-editor of the encyclopedia Masada and of Entsiklopediya lenoar (Encyclopedia for youth).  Among the books that he edited for Devir, there were the writings of Yude-Leyb Gordon and Sh. Ben-Tsiyon.  He contributed cultural historical and folkloric treatments, as well as general essays, to: Davar (Word), Haarets (The land), Hatsofe (The spectator), Moznaim (scales), Sinai (Sinai), Maḥanaim (Armies), and Hatekufa (The epoch), among others.  He edited Mishle-am beyidish (Popular sayings in Yiddish) (Tel Aviv, 1959) by Shimon Eynhorn.  He prepared for publication a three-volume handbook of Jewish customs.  He served as chairman of the folklore society “Yeda am” and of the world union of Jewish folklore researchers, and he represented them at international folklore congresses.  In Belgium he was chair of the unified parties of Labor Zionism and Zionist Youth.  Among his pen names: Tavyomi, Ben-Yisrael, Efrati, Eliot, Yatl, L. Yom Tov, and Hagi.  He also wrote for Di goldene keyt (The golden chain) (Tel Aviv) 42 (1962) 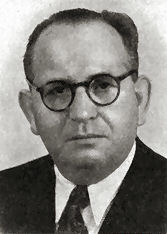