ARTUR (ARTHUR, AVROM-GERSHON) LERMER (October 3, 1908-June 26, 2001)
He was born in Cracow, Poland.  He studied with religious elementary school teachers, later attending a German and then a Polish high school.  Over the years 1924-1929, he studied at the Vilna Jewish teachers’ seminary and later at the “Wolna Wszechnica Polska” (Free Polish University) in Warsaw.  For several years he worked as a teacher in the Tsisho (Central Jewish School Organization) schools in Pyetrikov and Shedlets (Siedlce).  He lived in Lodz (1933-1939), where he was active in the Bund, the Kultur-lige (Culture league), and in the Jewish trade union movement.  During WWII, he made his way across Lithuania and Japan to Canada.  He was a member of the world coordinating committee of the Bund and traveled to South American countries on assignment for it.  He was active in the Workmen’s Circle, the World Jewish Congress, the Labor Committee, and the Jewish Cultural Congress in Montreal, Canada.  He wrote in Polish for the monthly Walka (Struggle) in Cracow (1925), later publishing articles in Lodzher veker (Lodz alarm).  From 1944 he contributed to: Tsukunft (Future) and Unzer tsayt (Our time) in New York; Unzer shtime (Our voice) in Paris; and Keneder odler (Canadian eagle) in Montreal (in which he also ran a weekly column on economic issues).  In book form: Structure and Trends in the Canadian Economy, a publication of the University of California, Berkeley (1948); and Cultural Pluralism in Canada (World Jewish Congress, 1955).  He died in Montreal.  He was a professor of socio-economic science and chairman of the Economics Department of Sir George Williams University in Montreal. 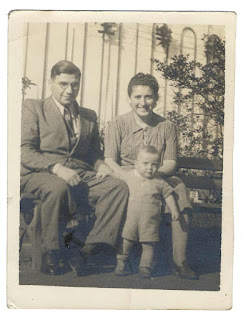 Lermer with his family in Tokyo, 1940