YISROEL-AVROM MAYOFIS (ISRAEL MAYOFIT) (February 12, 1897-February 18, 1930)
He was born in Shadove (Šeduva), Lithuania, into a rabbinical family.  At age four he moved with his parents to Doig (Daugai), where his father, Froym-Nisn, became rabbi.  He also lived for a time with his grandfather in a village.  He studied with his grandfather, with his father, and in the yeshiva of Rabbi Reynes in Lida, while at the same time studying physics, mathematics, and foreign languages.  At age sixteen he was working on his own mechanical inventions.  At age eighteen he received ordination into the rabbinate, although he did not wish to become a rabbi.  For a short time he worked as a private secretary to Rabbi Chaim Ozer Grodzenski in Vilna, and then at the end of 1919 he returned to Kovno.  Over the years 1924-1928, he was severely ill with tuberculosis, living in sanatoriums in the Black Forest and Davos, then a year back in Kovno; he was then brought, extremely sick, to Köln where he died.  He was already writing Hebrew poetry in his yeshiva years and debuted in print in Hatsfira (The siren) in Warsaw (1916).  He debuted in Yiddish with a poem, “In blutikn koshmar” (In a bloody nightmare), in Idishe tsaytung (Jewish newspaper), edited by Sh. L. Tsitron in Vilna (December 12, 1919), and from that point on he devoted himself solely to literature.  From 1920 until his death, he was a regular contributor to Di idishe shtime (The Jewish voice) in Kovno, in which he published poetry, stories, humorous sketches, articles, correspondence pieces from Germany and Switzerland, one-act plays, monologues, feature pieces in verse, a daily political “Klingklangen” (Ding-dongs), forty chapters of his country house novel in verse entitled Der toes (The error), and translations from Hebrew (Bialik, R. Yehuda Halevi, and Ibn Gavirol, among others), from Russian (Krilov’s fables), German, and Polish.  And, he edited the newspaper’s weekly humorous section, “Der mikroskop” (The microscope).  He also contributed to: Lodzer tageblat (Lodz daily newspaper); Dos naye leben (The new life) in Bialystok; Dos folk (The people) and Frimorgn (Morning) in Riga (for which he wrote a comedy in one act, Est tsu der sude [Eat at the banquet] and several children’s plays); Der tog (The day) and Grininke beymelekh (Little green trees)—children’s poetry and stories—in Vilna; Idishe lebn (Jewish life) in Kovno; Die welt (The world) and Tägliche Rundschau (Daily review) in Berlin; Forverts (Forward), Morgn-zhurnal (Morning journal), Yidishes tageblat (Jewish daily newspaper), and Tsukunft (Future) in New York; Idisher zhurnal (Jewish journal) in Toronto; Teglekher idisher kuryer (Daily Jewish courier) in Chicago; Di idishe velt (The Jewish world) in Philadelphia; Hatsfira in Warsaw; Netivot (Pathways) in Kovno; and Hadoar (The mail) in New York.  He authored a series of dramas and comedies which were produced for the Yiddish theater in Kovno and other places.  These plays included: Ver git mer? (Who’ll give more?), a comedy in three acts (1921); In blut un gift (In blood and poison) (1922); Der koyekh fun gelt (The power of money), a comedy in two acts (1923); Di shtume vayb (The quiet wife), a comedy in three scenes (1923); Tsu shpet (Too late) (1924); Gest tsu der sude (Guest for the repast), a comedy in one act; Di kleyne khalutsim (The little pioneers), a children’s play in one act; and Zelbst-hilf (Self-help), a children’s drama in four acts.  The last two of these were staged under Mayofis’s own direction in the sanatorium in Davos.  In 1921 he translated Bialik’s Shire am (Poems of the people) which later appeared (under Bialik’s supervision) in the volume, Lider un poemen (Poetry) (Berlin, 1922)—a portion was included as well in Y. Y. Shvarts’s edition of Bialik’s Lider un poemen (New York, 1935), pp. 267-87.  A man who was always anticipating his own end, he prepared in his sick bed five books of selected writings, one volume of which was entitled Humoristishe dertseylungen (Humorous stories) which included thirty-seven stories and humorous sketches, his country house novel Der toes, two children’s plays, and more—it was only published after his death (Berlin-Kovno, 1931), 262 pp.  On the occasion of the ninth anniversary of his death, a special supplement of Di idishe shtime appeared (Kovno, April 19, 1939), which included his unpublished poems, parodies, and humorous pieces.  Concerning Mayofis there circulated a rumor to the effect that his name was only a pseudonym used by Bialik; the basis for this was the extraordinary success of his translation of Bialik’s Shire am.  This mistake was cleared up by Arn Tsaytlin who wrote: “Bialik did not need to improve on Mayofis’s fine translation anywhere, and one must accord Mayofis all the credit for his fine work.”  He also published under such pen names as: Amitai, Emes, Y. Emes, and Yisroelik.  Posthumously published: Geklibene shriftn (Selected works) (Tel Aviv: Hamenora, 1970), 255 pp. 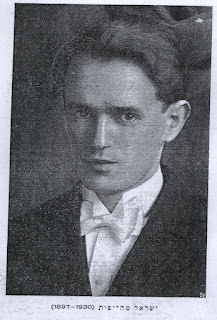