RUDOLF MARKS (MARX) (ca. 1867-May 6, 1930)
The pseudonym of Maks Rodkinson, he was born in Odessa, southern Russia.  He was the son of Mikhl Halevi Rodkinson, a writer and follower of the Jewish Enlightenment.  In his youth he moved with his parents to London where he received a general education.  In late 1886 he began to perform in the London Yiddish theater under the name Rudolf Marx.  He translated and adapted for Yiddish the English-language the play Der matroz, oder der yosem in gefar (The sailor, or the orphan in danger [original: The Stowaway]).  In 1886 he came to the United States, settled in New York where he was for many years tied to the Yiddish stage as an actor and as an author and translator of the plays: Der zilber kenig (The silver king), performed over 100 times in New York, and Der yudisher loyer in amerike (The Jewish lawyer in America)—later staged as Khayim in amerike (Life in America) in 1889.  He went on later to study law, and in 1900 he began to practice as an attorney in New York.  In the archives of the Yiddish theater held at YIVO in New York, the following plays of his may be found: Kin ([Edmond] Kean), based on the play by Alexandre Dumas; Der tayfel (The devil), a “philosophical biography in three acts, by [Ferenc] Molnár”; Der boyeri tremp (The Bowery tramp), a drama in five acts and eight scenes (1898); Perele, oder ferloyren in nyu-york (Perele, or lost in New York), in four acts; Di gassen kinder (The street children), in five acts; Moyshele soldat, oder di shtile khasene (Moses the soldier, or the quiet wedding), a drama in three acts with a prologue; Di tsvey shvester, oder engel un tayfel in froyen-geshtalt (The two sisters, or angel and devil in the image of women), “a salon drama in four acts and ten scenes” (1890); Di shnayderin (The female tailor), “a dream in four acts” (1902); Di primidone (The prima donna), in five acts; and Khayim in amerike, a drama in five acts.  Over the course of his theatrical career, he also wrote songs and couplets, which were sung in his own plays, as well as in plays by other authors.  He published poetry in Khonen Y. Minikes’s anthology Di idishe bihne (The Yiddish stage).  From them he published in book form: Rudolf marks’ biblyothek, eyn oysvahl fon di beste kupleten und deklamatsyonen (Rudolf Marks’s library, a selection of the best couplets and declamations) (New York, 1896), 32 pp.  He died in New York. 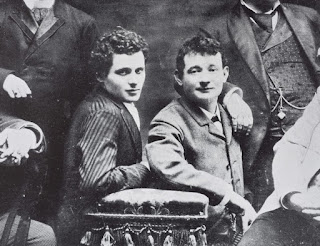 Marks on left, with Sigmund Mogulesco