MOYSHE MIZHIRITSKI (b. ca. 1892-1951)
He was born in the town of Khabne (Khabnoye), Kiev district, Ukraine.  He attended religious elementary school and a yeshiva, later graduating from the Literature and Linguistics Department of Moscow State University.  He was for a time a teacher in Jewish schools.  In the 1930s he was a researcher at the Kiev Institute for Jewish Culture (with Maks Erik), and later a scholarly contributor to the Institute, at which he defended a dissertation on the works of Dovid Bergelson and received the title of “candidate in philological sciences.”  He debuted in print in 1924 and went on to contribute literary critical articles on Yiddish writers in: Prolitpen (Proletarian pen) and Farmest (Challenge) in Kharkov; Proletarishe fon (Proletarian banner), Sovetishe literatur (Soviet literature), Literarish-kritishe etyudn (Literary critical studies) in 1940; and “Gorki un sholem-aleykhem” (Gorky and Sholem Aleichem) to the anthology Sholem-aleykhem (Sholem Aleichem) of 1940, among others such works, in Kiev.  He compiled school textbooks: with A. Abtshuk and Y. Rodak, Literatur (Literature), textbook for the fifth school year (Kharkov-Kiev, 1932), 80 pp.; with A. Abtshuk, Literatur, textbook for the seventh school year (Kharkov-Kiev, 1932), 124 pp.; with Sh. Bryanski, Lernbukh un khrestomatye fun literatur, Vtn klas (Textbook and reader for literature, fifth class), second edition (Kharkov-Kiev, 1934), 287 pp., third edition (1935), 206 pp., fourth edition (1936), 206 pp.  He also authored the book: Dovid bergelson (Dovid Bergelson) (Kiev-Kharkov, 1935), 163 pp.  Over the years 1941-1944, he was evacuated to deep inside Russia, later returning to Kiev, where he worked in the department of Jewish studies in the Ukrainian Academy of Sciences.  He contributed to the compiling of the history of the Jewish tragedy in Ukraine during the Nazi occupation.  He also worked with materials on “Babi Yar” and documents concerning the role of Jewish partisans in the fight against the Germans.  Aside from separate critical writings on individual Yiddish prose writers and poets in Soviet Russia, he also composed the work: Der onhoyb fun der sovetish-yidisher proze (The beginning of Soviet Yiddish prose).  He was arrested in 1948 and murdered in 1951. 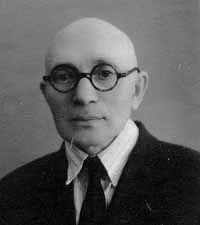