PEYSEKH BINETSKI (PESACH BINETZKI, BINECKI) (1912-January 3, 1966)
Born in Bialystok, Poland, he attended religious primary school and a Polish public school.  As a child of impoverished parents, he became a factory laborer at a tender age, and because he belonged to the left wing of the labor movement, he spent six year in Polish prisons and came out a sickly man.  In 1941 at the time of the German surprise attack against Russia, he (together with a group of Jewish writers) escaped from the Nazis.  He was in Novokuznetsk, near Saratov, and there he worked on a collective farm.  He later was in Alma Ata where he worked for a time in a coal mine.  In 1946, during the repatriation, he returned to Poland and settled in Lodz.  From 1949 he was living in Israel.  He began publishing individualistic lyrical and revolutionary poems in Inzl (Island), edited by Zishe Bagish (Bialystok, 1937).  He also published in Unzer lebn (Our life) in Bialystok, Literarishe bleter (Literary pages) in Warsaw, in the Soviet Byalistoker shtern (Bialystok star) (1939-1941), Der shtern (The star) in Minsk, Tsum zig (To victory) in Moscow, Dos naye lebn (The new life), Yidishe shriftn (Yiddish writings), Folks-shtime (Voice of the people), Oyfgang (Arise) in Poland, and Nay-velt (New world), and Letste nayes (Latest news) in Israel.  Aside from poems, he wrote short stories, impressions, reportage pieces, and articles as well.  Among his book-length works: A fenster tsu der velt, lider (A window on the world, poems) (Lodz, 1948), 70 pp.; Lider (Poems) (Warsaw: Yidish bukh, 1957), 89 pp.; Oysdoyer, lider un poemen (Perseverance, songs and poems) (Tel Aviv, 1963), 259 pp.; Hemshekh, lider (Continuation, poetry) (Tel Aviv, 1966), 107 pp.  This collection includes poetry written in Poland and Russia but not his later, more nationalistic and more poetic creations. 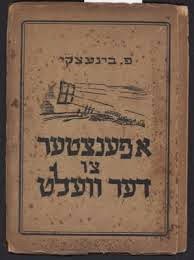