MAKS BINENSHTOK (MAX BIENENSTOCK) (March 24, 1881-March 20, 1923)
Born in Tarnów, Eastern Galicia, from his student years he was an active Zionist.  He worked as a high school teacher, putting up with the persecutions of the Polish authorities for his Zionist convictions and his pro-Ukrainian sentiment (1919).  He contributed to Polish and German periodicals.  In Yiddish he published in Lemberger tageblat (Lemberg daily news) and the anthology Ringen (Links).  After his death, an article of his was published: “Tsvey tekufes in der yid. literatur, pruv fun a sintez” (Two eras in Yiddish literature, evidence from a synthesis), Milgroym (Pomegranate), issue no. 6; and in Polish he wrote articles concerning modern trends in Yiddish literature and concerning Moyshe Broderzon.  Prior to his death, he was elected to the Polish Senate. 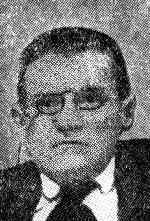