ESTER-ROKHL KAMINSKI (ESTHER-RACHEL KAMIŃSKA) (February 15, 1870-December 27, 1925)
Celebrated as “the mother of the Yiddish theater,” she was born in Porozove (Porazava), Grodno Province (Belarus).  At age twenty-two, she debuted on the stage as Mirele in Avrom Goldfaden’s Di kishefmakherin (The sorceress).  She first performed in operettas and melodramas.  From 1905 she began acting in a more elevated repertoire, principally Y. Gordin’s plays, and created unforgettable figures for the Yiddish stage, such as Mirele Efros.  In 1909 she received a telegram from Sholem-Aleichem, saying that he was preparing a special play for her, but this remained only a promise.  After her death, there was published her Briv fun ester-rokhl kaminski (Letters from Ester-Rokhl Kaminski) (Vilna: B. Kletskin, 1927), 158 pp.  Her memoir, entitled Derner un blumen, der veg fun mayn lebn (Thorns and flowers, the path of my life) was published in Warsaw’s Moment (Moment) (June 11, 1926-January 21, 1927).  She died in Warsaw. 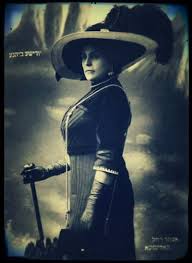