TSVI (DOV) AVNER (January 6, 1889-June 12, 1970)
The adopted name of Bernard Oderberg, born in Tshenstokhov (Czestochowa), Poland, to Hassidic parents; he studied in religious school and in the Lomzhe Yeshiva.  After his youth he joined the Labor Zionist Party, was arrested several times by the Tsarist authorities, escaped arrest, and lived illegally in Warsaw.  He fled from Poland and arrived in London where he was active in Labor Zionism in England and in the Jewish Legion.  From 1923 he was in the Land of Israel where he worked in various trades and became a painter.  He was one of the founders of Achdut ha-Avodah (Union of Labor) in Jerusalem and an active member of Haganah.  Most recently, he was a teacher of foreign languages.  He was the author of Di harfe, fun an arbeter (The harp, from a laborer), poems on Zionist and labor motifs (London, 1922), 84 pp.; Erets-yisroel refleksn un antifa[shistishe] lider (Reflections on the Land of Israel anti-fascist songs), images and reportage (Tel Aviv, 1948), 198 pp.; Sipurim niflaim al yehudim degulim (Wonderful tales of prominent Jews) (Jerusalem, 1950).  He also published under the name of Bernard Oderberg. 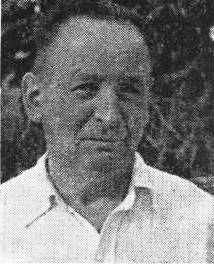