HIRSH ABRAMOVITSH (HIRSZ ABRAMOWICZ) (March 1 1881-January 29, 1960)
Born in Tomaszewo, Vilna district.  His father was employed in agriculture.  He studied Hebrew and other languages with a tutor, later in a religious school in Vilna, and then in the Vilna Teachers’ Institute.  He studied in the law faculty at Kharkov University, and he was a teacher in religious schools.  He was arrested in 1902 during a demonstration for May Day, and in 1906 at a Bundist conference in Katerinoslav.  He was removed from his teaching position for political reasons.  He was the director of the Jewish Professional School “Hilf durkh arbet” (Help through work) in Vilna over a period of twenty-four years.  He traveled to Canada and the United States on a communal assignment, and there he remained with the outbreak of WWII.  His wife, Anna, was killed in a Nazi gas chamber following the liquidation of the Vilna ghetto in 1943.  He began writing in Russian in 1902 (among other magazines, he published in Voskhod [Rising]).  He began publishing in Yiddish in Fraynd (Friend) in 1904.  In 1919 he began collaborating with Vilner tog (Vilna daily), and he was a correspondent for Yidisher tsaytung (Jewish newspaper) (Buenos Aires) and Frimorgn (Morning) (Riga).  He published articles, reviews, and translations.  He also published in the daily press, such as Yidishe shtime (Jewish voice) (Kovno) and Tsayt (The times) (Vilna); in such publications as Unzer gedank (Our thoughts), Frayer gedank (Free thoughts), and Pinkes fun der shtot vilne (Register of the city of Vilna); and the record book of Yekopo (Yevreyskiy komitet pomoshchi zhertvam voyny—“Jewish Relief Committee for War Victims”) entitled Af di khurves fun milkhomes un mehumes (The ruins of wars and turmoil), as well as Yivo-bleter (Pages from YIVO), among others.  In 1931 he published A litvishe shtetl in lebn un tsiper (A Lithuanian shtetl in life and numbers).  In the United States, he published articles in Forverts (Forward), Morgn-zhurnal (Morning journal), Der amerikaner (The American), Fraye arbiter shtime (Free voice of labor), and Litvisher yid (Lithuanian Jew); and in such collections as Lite (Lithuania), Afn shvel (At the threshold), and Frayland (Freeland).  He also wrote for Lebns-fragn (Life issues) (Tel Aviv), in which he published a work entitled 70 yor yidishe masn-emigratsye in tsofn-amerike (Seventy years of mass emigration to North America).  In Shvilei hachinukh (Paths of education), he published treatises on Hebrew pedagogy.  He used such pseudonyms as H. Dinin and H. Visokodvorski, and he lived in New York until his death there.  He also authored: Lern-varshtatn farn nodl-fan (Learning workshop for needle-pan [?]) (Vilna, 1922), 15 pp.;  Farshvundene geshtaltn (Disappearing images) (Buenos Aires: Farband fun poylishe yidn [Association of Polish Jews], 1958), 480 pp. 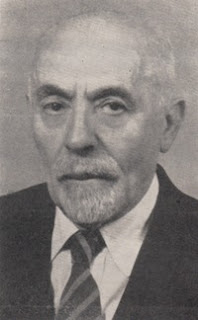