PAULINA KOBRIN (1875-August 29, 1961)
The wife of Leon Kobrin, she was born in Bialystok.  She completed a six-level high school.  In the early 1890s, she came to the United States.  She wrote sketches under her maiden name of Segal in Tsukunft (Future) and Abend-blatt (Evening newspaper) in New York.  Her four-act play Di tragedye fun a froy (The tragedy of a woman) was staged in 1913 in New York, and her adapted play M’dertsit a man (Educating a husband) was staged in London in 1926.  Together with her husband, she translated Tolstoy’s Der lebediker mes (The living corpse [original: Zhitoi trup] and de Maupassant’s Muzet (Musette) and Familyen tragedye (Family tragedy) which appear in volume 6 of de Maupassant’s Gezamlte verk (Collected works) (New York, 1923).  She assisted Leon Kobrin in translating many other works as well, but because of the publisher’s motives they came out solely under his name.  Her son, Dr. Nathan Kobrin, wrote: “In fact, over the course of many years, we had at home two writers: My father was the dramatist and my mother the translator from other languages into Yiddish.”  She died in New York. 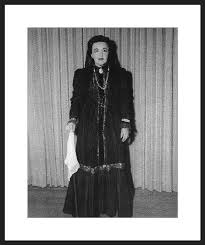