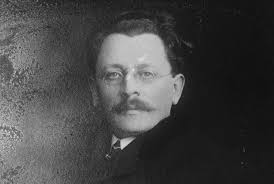 [1] Translator’s note.  Every source I have seen give 1905 as the publication date for this novel.