ALEXANDER TSEDERBAUM (ALEKSANDER TSEDERBOYM) (August 27, 1816-September 7, 1893)
He was born in Zamość, Lublin district, Poland.  His father Yosef was a scholar and a follower of the Jewish Enlightenment, knowledgeable of foreign languages and philosophy, and the author of Hebrew-language poetry.  Adherents of the Enlightenment gathered in their home, and among them was the Yiddish poet and playwright Shloyme Etinger.  This enlightened environment exerted an influence on the young Alexander.  He studied Jewish and general topics privately, as well as German, Polish, and French.  He married in 1935 and moved to Lublin where he lived for five years.  In 1840 he settled in Odessa, where he initially worked as a bookseller and later launched a shop for ready-made clothing.  On his own he mastered tailoring and actually devoted himself to this trade.  Although busy with his shop, he also did work for the community and became a leader in charitable and educational institutions.  Through this work, he became known to important government persons, and he used these acquaintances to act as intercessor on behalf of Jewish interests.  As all followers of the Jewish Enlightenment, he was influenced by the Enlightenment in Germany.  The Germans held that Yiddish should be supplanted by German, but the language question for Polish and Russian followers of the Jewish Enlightenment was considerably more complicated.  German was not the language of the land in Poland or Russian.  The “Enlighteners” in Russia thus came upon the idea that people should actually destroy Yiddish, but it did not matter which language superseded it: German, Polish, or Russian.  Tsederbaum was the only one who believed that the Jews in Russia should embrace the language of the country in Russian.  Gradually he came to the conclusion that one could only speak to the Jewish masses in Yiddish, and that Yiddish should be the language for enlightenment and of necessity for cultural creativity.  Because of the motive of usefulness, the idea gradually matured in Tsederbaum’s mind to make use of a periodical in Yiddish.  He was initially simply ashamed of publishing a newspaper in Yiddish, and therefore he requested permission to publish a newspaper in Hebrew and German in Jewish script.  In 1859 he came to Warsaw to lobby for permission.  He connected over this with the assistant censor, Jakub Tugendhold, and together they took pains to acquired permission to bring out a newspaper “of Jewish interest.”  Nothing, however, came of their plan, because they were not given authorization.  A little earlier, in 1856 Osip Rabinovich and Joachim Tarnopol submitted a request concerning allowance of a Jewish weekly in Russian, and they pointed out in the process that Yiddish was a great obstacle for educating Jews, while Russian was the language that would unify the Jewish population.  The request was endorsed was Nikolai Pirogov, the trustee of Odessa educational circles.  Just then the Tsarist government announced that this permission would be granted if the newspaper was published in Yiddish or Hebrew.  Both Rabinovich and Tarnopol refused to publish a newspaper in Yiddish, and Tsederbaum thus used this permission to begin publishing the weekly Hamelits (The advocate).  On September 29, 1860, he brought out the first issue of Hamelits.  It appeared in two languages; the majority of the articles were in Hebrew, but occasionally there appeared articles in German written in Jewish letters.  Tsederbaum, however, looked around and saw that no one was reading the German articles, and he decided—under the influence of Shiye Lifshits and Sholem-Yankev Abramovitsh (Mendele Moyklher-Sforim)—that, in place of German articles, he would try to publish a column in Yiddish.  With their encouragement, in issue 24 of Hamelits (1862), he announced that, together with Hamelits, he intended to bring out a separate newspaper Kol mevaser (Herald) “in simple Yiddish so that the common public and even women would know what is going on in the world.” 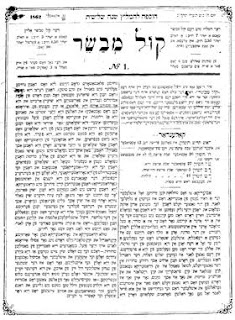 The first issue appeared on October 11, 1862 as a supplement to Hamelits.  From 1869 Kol mevaser was published as an independent newspaper.  At first, Tsederbaum instituted an orthography according to vocal expression.  In this way he helped normalize Yiddish spelling.  News would be presented in the weekly from Russia itself and from abroad, as well as correspondence pieces from the Pale of Settlement.  Also published were articles on politics, life stories of great men, popular science articles, and essays on Jewish history, pedagogy, and natural science.  A very close contributor was Shiye Lifshits, who in a series of article for Kol mevaser justified a popular Yiddishism.  Lifshits published a piece entitled “Di fir klasn” (The four classes), which, according to Yisroel Tsinberg, “possessed without a doubt special historical value.  Many of the complaints and evidence which contemporary fighters for the Yiddish language now use were already clearly put forward by the old, long deceased Lifshits.”  In Kol mevaser, Mendele Moykher-Sforim debuted in Yiddish with his “Dos kleyne mentshele” (The little fellow) (1864-1865), and later Y. Y. Linetski with his “Dos poylishe yingl” (The Polish lad) (1867).  Literature, political articles, and correspondence pieces made of the weekly periodical a community periphery, such that “one regarded more highly the views expressed in the Yiddish newspaper than in the Hebrew Hamelits,” according to Yankev Shatski.  Nonetheless, Kol mevaser was unable to free itself from the Enlightenment ideology, and thus it campaigned among Jews to speak the language of the country in which they lived—namely, Russian.  “The role of Kol mevaser in the history of Jewish journalism,” wrote Y. Shatski, “was immense.  It had a huge influence on Jewish life in Russia, it created modern readers and modernized the Yiddish language, and it enriched and introduced consistency in Yiddish orthography.  Kol mevaser laid the foundation for modern Yiddish literature.”  Tsederbaum was the chief contributor to Kol mevaser.  He wrote the articles for the editorial board, the majority of them under the pen name “Arz.”  He would also add long annotations, explanations, and postscripts to essays by other writers, and in his own essays he evinced an authentic journalistic temperament and talent for extraordinary journalism.  He wrote articles on the most important problems of that era.  He was especially concerned with the questions of education, Enlightenment, civic duties, and critiques of the newly arisen intellectuals whom he reckoned for nihilists.  He also wrote about the fanaticism of Hassidism, but at the same time he criticized the “new Jewish providers”: the adherents of the Jewish Enlightenment.  He even approached, bit by bit, a mild Yiddishism.  Although he campaigned on behalf of use of the national vernacular, he often came out for Yiddish and against the actions of the radical enlighteners.  He even came out for Yiddish as the language for the land of Israel.  Tsederbaum composed a series of articles, “A gast af a vayl, zet af a mayl” (A guest for a while sees for a mile)—a description of his travels through Russia—and also “Di rekht un legotes far yidn zint 1866” (The rights and privileges of Jews since 1866).  He was one of the first Yiddish literary critics.  He wrote on Avrom Goldfaden, A. B. Gotlober, Mendele Moykher-Sforim, Yisroel Aksnfeld, and Y. L. Gordon.  His demands of literature were primarily realism and utility.  “One can rightly consider Tsederbaum,” wrote A. R. Malachi, “a pioneer in the realm of Yiddish criticism….  His greatest service is that he brought forth two classic writers of Yiddish literature, Mendele Moykher-Sforim and Y. Y. Linetski.  Kol mevaser also provided a stimulus to creation of the Yiddish press in the 1870s in Romania, Galicia, England, and the United States.  Even in Jerusalem an effort was made to publish a Yiddish newspaper.”  In 1871 Tsederbaum took Hamelits to St. Petersburg—however, he did not get similar permission for Kol mevaser.  Kol mevaser carried on in Odessa.  Its main contributor was M. L. Lilienblum, and the actual editor was the Enlightenment follower and publisher M. Belinson.  He ran the newspaper according to his own tastes and fancies—and paid no heed to Tsederbaum’s protests in Hamelits.  Rabbinical lawsuits and quarrels ensued, and this led to the demise of the newspaper.  The last issue appeared on November 15, 1878.  In 1881 Tsederbaum began publishing in St. Petersburg a weekly entitled Yidishes folks-blat (Jewish people’s newspaper), the first modern European periodical in Yiddish, as noted by Y. Shatski. 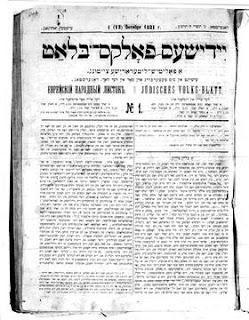 This weekly appeared from October 13, 1881 until March 18, 1890.  Yidishes folks-blat with its special weekly and later monthly supplements played a large role in Yiddish literature.  Tsederbaum published the work of Y. Dinezon, M. Spektor, Dovid Frishman, M. L. Lilienblum, and A. L. Levinski, and it featured the debut writings of Sholem-Aleichem and Shimen Frug.  In 1886 Tsederbaum was forced by a rival to transform the weekly Hamelits into a daily newspaper.  With the profits from Yidishes folks-blat, he compensated for the great deficit accruing to Hamelits.  In the end, though, because of debts, Yidishes folks-blat fell to the hands of the publisher Yisroel Levi, a bitter enemy of Yiddish and Yiddish literature.  Levi closed down the newspaper.  Tsederbaum also received permission to publish several Jewish serials in Russian.  As such he was the official editor of Vestnik russkikh evreev (Herald of Russian Jewry) in 1871, Razsvet (Dawn), and Russkii evrey (Russian Jew) in 1879.  His books include: Di geheymnise fun berditshever (The secrets of the Berdichever) (Warsaw, 1870), 84 pp.; Keter kehuna o divre hayamim (Crown of the priesthood or chronicles) (Odessa, 1866), 182 pp.; Ben hamezarim o yiḥus azmo (Between the Straits of Hurmuz and Egypt) (Odessa, 1867), 77 pp.; Aharon (Aaron) (1868).