YITSḤAK YATSIV (SHPIGELMAN) (May 2, 1890-May 27, 1947)
He was born in the town of Sochacin near Plonsk, Poland.  In 1910 he moved to Israel, graduated from a Hebrew teachers’ seminary there, and later worked as a teacher in Jerusalem and Tel Aviv.  He was a member of the Labor Zionist Party.  He helped create the Israel Federation of Labor.  In 1918 he joined the Jewish Legion.  After the disbanding of the Legion, he left for Germany, graduated in 1923 from a technical college in Berlin, and then returned to Israel.  From 1923 he was (together with Berl Katsenelson and Eliyahu Golomb) co-editor of Kuntres (Pamphlet) in Jerusalem, and with the founding of the daily newspaper Davar (Word) in Tel Aviv (1925), he became one of its principal contributors and edited the children’s supplement Davar leyeladim (Word for children).  In 1929 he became the standing Israeli correspondent for New York’s Forverts (Forward), for which he wrote until his death.  His correspondence pieces were interesting descriptions of the work of pioneers and of various achievements of labor in Israel.  In additions to his correspondence pieces, he published articles in the newspaper of a general political character on life in Israel.  He contributed as well to the Labor Zionist newspaper Dos vort (The word) in Warsaw.  He was the author of the monographs: Aharon etkin, pirke ḥayaṿ mesuparim meet ḥaveraṿ (Aharon Etkin, his biography narrated by his friends) (Tel Aviv, 1939), 66 pp.; and Dov hoz, pirke ḥayim (Dov Hoz, a biography) (Tel Aviv, 1942), 99 pp.; among others.  After Yatsiv’s death, a number of his works for children were published in the volume, Bemagal hayamim (In the circle of days), with a preface by Yaakov Fikhman and illustrations by Naḥum Gutman (Tel Aviv, 1949), 416 pp.  A small selection of his reportage pieces on Israeli workers’ lives and a cycle of treatments of writers and books were included in his book, Ben ayin lenefesh, reshimot, maamarim, masot (Between the eye and the soul: Notes, articles, essays), with a preface by Dov Sadan (Tel Aviv, 1953), 346 pp.  He died in Tel Aviv.  In his memory, a children’s home “Bet Yatsiv” (Yatsiv House) was established in Kiryat Ḥayim near Haifa. 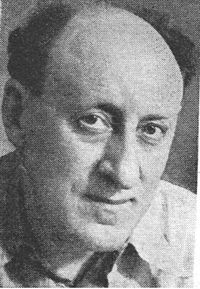