BOREKH-MORTKHE (“VIRGILI”) KAHAN (August 5, 1883-January 31, 1936)
He was born in Mohilev (Mogilev), Byelorussia.  His father Yitskhok Kahan, the brother of the Hebrew writer Mordekhai ben Hillel Hacohen, was a well-to-merchant businessman and a fervent Ḥabadnik (follower of the Lubavitsher Rebbe); he sent his son to study in the yeshivas of Brisk (Brest) and Volozhin.  He later acquired a general education in Mohilev where he settled in 1898.  At that time, he had occasion to meet members of illegal Jewish labor circles in Homel (Gomel); in 1899 he joined the Bund for which, thanks to his oratorical skills, energy, and organizational talents, he soon distinguished himself on behalf of the movement.  Together with Viktor Shulman and Y. Kh. Brener, he published in Homel (1900-1901) the illegal work Der kampf (The struggle), and in 1902 he was already a “professional revolutionary,” had gone on a variety of assignments from city to city, transported illegal literature, fell into the hands of the police in Smolensk, and with his own personal heroism extracted himself from the authorities and make his escape abroad.  He was in Geneva (1904) where he took part in the work of foreign committee of the Bund, and in 1905 he returned to Russia and (using the party pseudonym Virgili) was active in the Bundist movement in Homel, Mohilev, Bobruisk, Vilna, Smorgon (Smarhon), Zhitomir, Lodz, and St. Petersburg.  In April-May 1905, he was the organizer of the Bund’s self-defense during the Zhitomir pogrom, and in June made his way from there promptly to Lodz, participated in the fight at the barricades on Wschodnia Street, was apparently wounded, and for a time disappeared from sight.  He was taken for dead among the Bund members, and in the Bundist Letste pasirungen (Latest happenings) of July 25, 1905, an obituary for him was published.  In 1906 he was a delegate to the seventh conference of the Bund in Lemberg; in 1907 he was a member of the Bundist delegation to the conference of the Russian Social-Democratic Workers’ Party in London; in 1908 he led a strike of 2,000 women stocking-makers in Vilna.  Under the influence of the political reaction that year in Russia, Cohen underwent a mood swing of depression, became religious, withdrew from party work, and only after the outbreak of WWI returned to St. Petersburg where he worked as director of a factory.  In 1918 he settled in Vilna and took up a leading role in an array of Jewish community and cultural organizations, such as: the Vilna Jewish relief committee for war refugees (Yekopo); the Central Education Committee in Vilna; the Central Jewish School Committee (Tsisho) for all of Vilna; the Yiddish Scientific Institute (YIVO)—until his death he was member of its executive committee; and the like.  He worked in leading positions in ORT (Association for the Promotion of Skilled Trades), later in the Jewish people’s cooperative bank of Vilna.  In 1927 he was a Bundist representative on the Vilna city council; in 1928 he was a member of the Vilna Jewish community administration.  He visited Israel in 1927 and later took part in a campaign for the rights of the Yiddish language in the land of Israel, a movement led from Poland.  He published articles and correspondence pieces in Veker (Alarm), Folkstsaytung (People’s newspaper), and Di hofnung (The hope) in Vilna (1906-1907); was a contributor to the Russian-language Bundist Evreiskii rabochii (Jewish labor) in St. Petersburg (May-July 1918), and to Shul un heym (School and home), a journal for adults in Vilna (1921-1923); served as editor of Unzer shtime (Our voice), a one-off publication of the Bund in Vilna (September 1926).  He contributed anonymously to numerous publications of the Central Education Committee and ORT in Vilna.  After the split in the Vilna Bund (1920-1923), he followed the social-democratic Bund and wrote pieces for its newspapers.  He died in Vilna.  Some 20,000 people attended his funeral.  Kahan’s great idealism was praised in the obituaries for him.  In his memory, YIVO established in his name in 1937 the “Proaspirantur” [a preparatory program for research students who had not studied at the tertiary level] and the following year published B. kahan virgili, zamlbukh tsu zayn biografye un kharakteristik (B. Kahan Virgili, collection on his biography and character), 139 pp., which included articles and memoirs concerning his life and work; and it republished his article on the Jewish family which had appeared in Shul un heym (issue no. 1). 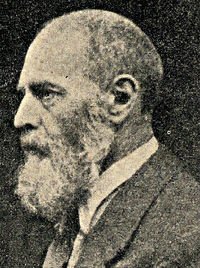