MORTKHE BEN-HILEL COHEN (HACOHEN) (January 8, 1856-Fecember 7, 1936)
He was born in Mohilev (Mogilev), Byelorussia, into a family of wealth.  His father, a scholar and a pious man but having become a man of secular habits, was almost always away from home on business, and the young lad was raised under the influence of his grandfather, Rabbi Tsvi Cohen, a wealthy man from Shklov (Szkłów) and a Hassid.  He studied the old Jewish ways with the best teachers who were put up in their home, and Yiddish and Russian—with Yiddish writers who would drop by for an hour during the day.  In the effectively closed courtyard of Tsvi Cohen, which also served as a study hall, also lived the city bookseller, and through him Cohen became acquainted, while quite young, with the literature of the Jewish Enlightenment in Hebrew and Yiddish.  His literary activity began with correspondence pieces in Halevanon (Lebanon) in 1879, Hatsfira (The siren), and Hashaḥar (The dawn).  He then moved to St. Petersburg, became in 1879 a contributor to Rassvet (Dawn), later (until 1882) secretary of its editorial board, and there published, among other items, a monograph on Jewish farmers in southern Russia (which appeared separately as well).  He also placed work in Russkii Evrei (Russian Jewry) and many years later in the anthologies Perezhitoie (The past).  He was active in the movement of Ḥibat tsiyon (Love of Zion), visited the land of Israel in 1890-1891, and described both trips there in his work Al admat yisrael (To the land of Israel).  In 1891 he published his essay “Naḥala mevohelet” (Legacy distressed), which criticized the colonization of the “Lovers of Zion” and their representatives and made a huge impact.  In 1897 he was a delegate to the first Zionist Congress in Basel and the first one there to give a speech in Hebrew.  From the early 1890s, he was contributing to the Russian business and financial press, and he was considered an expert on issues concerning the lumber industry along the Dnieper River.  He wrote a great deal for the Hebrew press under such pen names as: M. Ḥashmonai, Miḥa Darkhan, Abuha Deshmuel, and Ploni.  In 1907 he moved with his family to Israel and settled in Jaffa.  He was one of the founders of Tel Aviv.  He composed the regulations for the neighborhood and for the Jewish community in Jaffa.  He published articles in: Hashiloaḥ (The shiloah), Hazman (The time), Haolam (The world), and Hatsfira; and he served as co-editor of Moledet (Homeland).  During WWI he founded a savings and loan bank in Tel Aviv.  He was also active in the Herzliya High School.  He was a founder of Yeshivat Hamishtalmim as a seminary for Mizrachi.  He also founded the highest-level Hebrew Justice of the Peace and savings and loans banks in Jerusalem, Tel Aviv, Haifa, and elsewhere.  He was one of the first initiators to establish the Hebrew writers union in Israel.  He published some twenty books in Hebrew, among them Sefer shemot (The book of names), which included the biographies of forty-four of the earliest Zionists, writers, and community leaders, as well as his own autobiography (published in 1938, after his death) (Jerusalem, 208 pp.).
To Yiddish he was drawn like a follower of the Jewish Enlightenment to zhargon, but he just happened to be an extraordinary storyteller-depicter with an authentic folk idiom, a fine sense of humor, a juiciness of language, and a true strength of image.  He began writing in Yiddish for Der yud (The Jew), in which he published (using the pen name “Gut morgn”) images and scenes from Jewish life in Lithuania.  He was later a regular contributor to Fraynd (Friend).  Using the pseudonym “Der Eygener,” he introduced in Fraynd the short feature “Vos gehert-vos gezen” (What was heard and what was seen); he also wrote longer features entitled “Koolshe gesheftn” (Public commerce), and (under the pen name “Ben-Hilel”) a historical treatment “Khmelnitskis tsayt” (Khmelnytsky’s era) in 1906, among others.  In the monthly Dos leben (The life) 5-6 (1905), he published a longer work entitled “Yidishe klal-asifes” (Jewsh community meetings).  In a volume of his Yiddish works, entitled In mame-loshn (In Yiddish) (Vilna, 1935), 303 pp.—a collections of memoirs, sketches, descriptions, and characterizations—which although published in Vilna, was edited and compiled in Israel, the author found it necessary to write in his introductory dedication: “This batch of published pages—a paper tombstone in memory of my dear mother, Rivke daughter of Rabbi Yankev Varhaftik-Lubliner.  Dear Mother, this little book I am publishing not for any honor, not for the money.  I seek no sustenance and I have grave doubts about any honor coming my way.  I am publishing this book of Yiddish writings only as a memory—for you, my dear mother.  So, it is in your language which you taught me.  I should have done this long ago, but now is the last opportunity.  I am all alone, I your youngest son will soon be coming to join you….  You must have a brilliant paradise, dear mother.  Jerusalem, on the anniversary of her death, 1934/1935.”  He died at Mount Carmel and was buried at Binyamina. 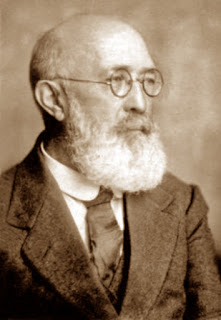