MOYSHE COHEN (MOYSÉS KAHAN) (June 19, 1908-March 1972)
He was born in Rovne (Rovno), Volhynia.  He studied law at Warsaw University.  In 1932 he made his way to Brazil and there graduated as a lawyer from the University of São Paolo.  He was among the most prominent Jewish community leaders in Brazil.  He served as president of the Federation of Jewish Associations, of the management committee of YIVO, and of the World Jewish Congress, and he was among the leadership of the Zionist Organization and a member of the executive of the Jewish World Congress.  He initially published articles in the Portuguese-language Crónica israelita (Jewish chronicle) in São Paolo, and later he switched to Yiddish.  He published articles, literary essays, and chapters from his work on Jews in Brazil in: Di idishe prese (The Jewish press) and Brazilyaner idishe tsaytung (Brazilian Jewish newspaper) in Rio de Janeiro; Velt-shpigl (World mirror) in 1930-1940 (for which he also served as co-editor) and Nayer moment (New moment) in São Paolo.  He was the author of: Yidn in der antshteyung fun brazil (Jews at the dawn of Brazil) (São Paolo, 1955), 104 pp.; Judeologia (Judaism) (São Paolo, 1948), 113 pp., in Portuguese, in which he sought to establish a scholarly basis for the essence of Judaism.  He died in São Paolo. 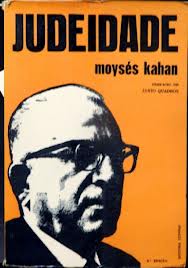