He was a poet, born in Zembin (Zyembin), Borisov (Horad Barysaw) district, Byelorussia. He was the son of a cobbler and the grandson (on his mother’s side) of Leyzer Sheynman, the well-known wedding entertainer from Zembin. Until age twelve he studied in religious primary school and a Russian public school in Zembin; he later worked in Minsk, Borisov, Homel, and Vitebsk, as an unskilled laborer in a bakery and an assistant to a druggist. From 1917 until 1919, he was the administrator of a school, a leader in the trade union movement, and a librarian in Minsk. In 1919 he became a Communist, volunteered to join the Red Army, and took part in battles against the White Guard in Byelorussia and against the Poles. He spent the years 1921-1923 studying at the V. I. Briusov Institute for Literature and Art in Moscow, and in Moscow he graduated from a senior literary school in 1924. He subsequently returned to Minsk (1928 to the summer of 1937), where he graduated from the philological institute and took up leading positions in the general and Jewish life of Byelorussia. He also became editor-in-chief of the literary-artistic and sociopolitical journal Shtern (Star), served as one of the directors of the People’s Commissariat for Education in Byelorussia, and stood at the head of all Yiddish cultural work in Byelorussia until the end of his life. He was selected as a corresponding member of the Byelorussian Academy of Sciences, and he was a member of the presidium of the central executive committee of the Byelorussian Communist Party. He was also a delegate and one of the main speakers at the All-Soviet Writers’ Conference. Kharik distinguished himself in Yiddish literature in Soviet Russia as the poet of “Minsker blotes” (Minsk mud).

Kharik was one of the people who laid the groundwork for Soviet Yiddish literature. One finds in his work artistically laid out the foundational stages and significant phenomena that transpired in Jewish life in the Soviet Union, especially in Byelorussia, at a time when the process of industrialization and collectivization were running at full blast there. Creative intelligence was “attached” to industrial undertakings and collective farms, provided that one created work in which “the enthusiasm of workers and peasants” played its part. Kharik was “attached” to the greatest construction at that time in Byelorussia: the electrical station “Osintorf,” located deep in Polesia (where were immense reserves of peat, which had to serve as heating for the station). Kharik stayed there for a considerable period of time, and it appears as such in his poem “Kaylekhdike vokhn” (Circular weeks). It was promptly included in the teaching programs for Jewish schools, and extracts from it were read aloud in literary evenings in clubs and recited at conferences. The poem was, in truth, a significant event in Yiddish literature. Kharik’s poetry—“Minsker blotes,” “Mit layb un lebn” (Body and soul), “Kaylekhdike vokhn,” and “Af a fremde khasene” (At a strange wedding), among others—were popular and beloved by Yiddish readers. His poetry excelled with its fine craftsmanship, with flaming revolutionary pathos, and with authentic spirit of the people. An innovative poet and a master of modern creativity, he forged new paths for the subsequent generations of Soviet Yiddish poets. His contemporaries explained that young writers from Minsk were simply in love with him, a word from him was holy in their eyes.

It was an unexpected blow and puzzle for everyone when in June 1937 he was arrested in Minsk. No one could understand what crimes could be laid before this prominent activist for Yiddish culture and fiery patriot. Shortly before this event, with great enthusiasm the fifteen-year anniversary of his literary activity was celebrated. At this jubilee the Byelorussian Academy of Sciences published a collection of articles by the best-known authorities of Yiddish literary criticism. The central Moscow newspaper Der emes had dedicated an entire page to the honoree on November 15, 1935 with warm, praiseworthy articles and a large portrait of the poet, painted by the famous artist M. Rabitshev. That year a special plenum of the Byelorussian Writers’ Association dealt with the question of “On the nationalist and Trotskyist contraband in Byelorussian and Yiddish literature.” Kharik’s name was mentioned only in passing—just the editor of the journal Shtern, who did not realize the “actual face” of a series of writers and critics and who willingly published their work. In late May-early June 1937, a series of writers’ conferences took place in Minsk, at which was raised the then widespread issue of the “struggle against Trotskyist Averbakhist diversion in literature,” and Kharik was directly accused of the “idiotic illness of carefreeness” embodied in his publishing the work of the “long unmasked enemies of the people, of the counter-revolutionary bandits”—men like Khatskl Dunets, Yashe Bronshteyn, Ziskind Lev, Arn Yudelson, and others (they had all by then been purged). But they had, in fact, “discovered” guilt—for he had ostensibly taken part “in the attack on Kirov and was in the group which prepared an attempted assassination on the then People’s Commissar for Defense Voroshilov.” He was dragged through a number of Russian prisons, where they ferociously tortured him. He went insane and was brought in September to the labor camp at Sukhobenzvodny in northern Russia. On October 28, 1937 he was brought to court for a trial that lasted fifteen minutes. He was sentenced to the highest punishment, and the next morning the sentence of the court was carried out: he was shot. That same day the poet Moyshe Kulbak and the literary critics Yashe Bronshteyn and Khatskl Dunets were also shot.

“His was a profoundly ethnic form, as he drew his poetic nourishment from popular Jewish sources,” wrote Moyshe Litvakov. “His landscape,” noted Leyb Tsart, “was Byelorussian Jewish folklore.” “He was the heart of the company of Yiddish writers in Byelorussia,” wrote Uri Finkl, “…while his Af a fremder khasene is rife with an artistic sense of completion and his figure of the wedding entertainer is a protesting lamedvovnik, through whom the simple man of the people speaks.” Kharik was one of the Soviet Yiddish writers who were murdered by the brutal sword of Stalin and who would not be rehabilitated for many years. In the new edition of the Great Soviet Encyclopedia (1957), it simply states that he “died in 1937,” and in the literary biographical dictionary of Soviet writers from Byelorussia (Minsk, 1957), it states: “He died somewhere in 1937.” It would be some time before his poems appeared again in the Soviet Union. His poems in Byelorussian (Minsk, 1958) and in Russian—with an introduction by Arn Vergelis (Moscow, 1958)—were all that appeared. Of his literary heritage, a few poems have been preserved, and they were published in Folks-shtime in Warsaw (April 13, 1957) and in Parizer tsaytshrift 15 (1957). 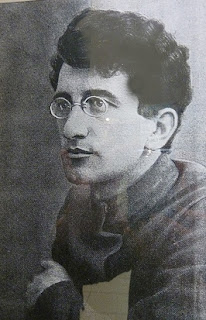