ZEV HARING (August 21, 1910-February 26, 1988)
He also wrote under the name Zigmund Hering.  He was born in Przemyśl, Galicia.  He graduated from a Polish high school, studied in Warsaw University, and in 1934 received his degree as a doctor of jurisprudence.  From his early youth, he was active in the Zionist youth movement, later in the Hitaḥdut (the “union” of young Zionists) in western Galicia.  During the Soviet occupation of eastern Galicia (1939-1941), he organized an illegal emigration to Vilna.  He arrived in Israel in 1940, joined the Jewish Brigade, and took part in fighting on the Italian front.  During the War of Independence with the Arabs, he commanded a tank division in the battles around Jerusalem and the Upper Galilee.  Over the years 1951-1954, he studied at the London School of Economics and Political Science.  From 1954 he was a member of the Vaad Hapoel (Zionist General Council) of the Histadrut and a lecturer in the field of political economy at a Tel Aviv senior high school, and from 1956 until 1960 he was a lecturer in political science at Tel Aviv University.  In 1969 he was elected to the Knesset where he served until 1973.  He visited the United States in 1957 on behalf of Histadrut.  He began writing in Polish, and from 1932 switched to Yiddish and Hebrew.  He contributed to: Dos fraye vort (The free word) in Lemberg, Dos vort (The word) in Warsaw, Dos vort in Munich, and Davar (Word) and Hapoel-hatsair (The young worker) in Tel Aviv, as well as for English-language publications of Mapai (Workers’ party of the land of Israel) and Labor Zionism.  Among his books: Tsvishn khubn un geule (Between destruction and salvation) (Munich, 1948), 96 pp.; Hamahpakha haaḥarona baangliya (The last revolt in England), concerning the economic accomplishments of the British labor government (Tel Aviv, 1957), 162 pp.  He also edited Dos fraye vort (1935-1939).  He was last living in Tel Aviv. 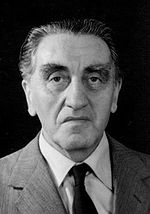