SHMUEL DON (February 16, 1897-November 1972)
He was a poet, born in Pultusk (Pułtusk), Poland.  He studied in religious elementary school.  In 1914 he moved to the United States.  He had a difficult life, wandering across the country, engaged in various trades.  He left with the Jewish Legion for Palestine and later returned.  He composed two poems for Di feder (The pen) and then ceased writing for over twenty years.  In the 1950s he took up writing poetry for Yidishe kultur (Jewish culture), Morgn frayhayt (Morning freedom), and Zamlungen (Anthologies)—in New York.  In book form: In last fun teg, lider un poemes (In the burden of time, poems) (New York: IKUF, 1959), 144 pp. 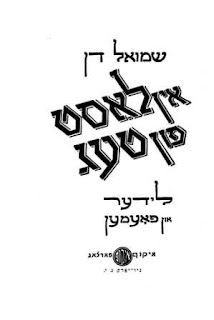