SHIMEN HORONTSHIK (SZYMON HORONCZYK) (June 13, 1889-September 1939)
He was born in Vyelun (Wieluń), Kalisz region, Poland, into a poor Hassidic family.  He was orphaned on his father’s side at age eight and until age eleven was raised by his grandfather, an old follower of Kotsker Hassidim, who made a living by registering the felling of trees.  After his grandfather’s death, Horontshik returned to his mother who was leading a poor, labored life; he studied for a time in a synagogue study hall and later at a number of yeshivas.  At age seventeen he became a worker in a lacework factory in Kalisz, where he lived until the outbreak of WWI.  Under the influence there of the writer Hershele, he began to compose poetry, became a member of the local writers’ circle to which Hershele, Perets Opatshinski (incidentally, a relative on his mother’s side), Mendl Zaks, and Osher Shvartsman belonged.  At the time of the bloodbath brought about by the German military in Kalisz (August 1914), Horontshik barely survived (he was the ninth in a group of people whom the Germans were shooting every tenth).  This instance affected him his entire life and continued to terrify him throughout his career.  He later made his way with Hershele to Lodz, but he found no refuge there and returned to Sompolno, Poland, where he married and sustained himself by operating a grocery.  During the war he traveled to Lodz and published in 1916 in Lodzer tageblat (Lodz daily newspaper) his first sketch which attracted attention due to its innovative means of depicting the small town Jewish community.  Over the years 1918-1920, he placed poems in such publications as: Gezangen (Songs), Vegn (Paths), Shveln (Thresholds), Di yetstige tsayt (The present time), and others—all in Lodz—a great number of these appeared in his first book, Feldblumen (Flowers of the field) (Warsaw, 1921), 98 pp.  He later moved entirely to prose writing and published a large number of stories, sketches, and novellas in: Itshe Meyer Vaysenberg’s Zamlbikher (Anthologies), Folkstsaytung (People’s newspaper), Ringen (Links), Der shtrom (The tide), Varshever shriftn (Warsaw writings), Inzer hofenung (Our hope), Haynt (Today), Moment (Moment), Unzer ekspres (Our express), Literarishe bleter (Literary leaves), Foroys (Onward), Vokhnshrift far literatur (Weekly writing for literature), and Dos vort (The word)—all in Warsaw; Yidishe bilder (Jewish images) and Frimorgn (Morning)—in Riga; Lodzer tageblat and Folksblat (People’s newspaper) in Lodz; Tsukunft (Future) in New York); Der shpigl (The mirror) in Buenos Aires; and other serial publications in Argentina, France, and England.  For a lengthy period of time, he lived in Włocławek (in the home of the fable-writer Fishl-Ber Ravitski), and primarily in the picturesque region of the Włocławek suburb of Szpetal where he composed his first long work: Farplonterte vegn, oder tsvishn di khurves fun yidishn lebn (Muddled way, or amid the ruins of Jewish life), with a foreword by Vaysenberg (Warsaw, 1924), 280 pp.  This book provoked a storm among Yiddish writers over his Chapter 46, in which he attacked the circle of Yiddish writers in Warsaw.  This chapter—actually, it was composed and inserted by Waysenberg—was adapted to the general framework of Horontshik’s descriptions of the demoralization of Jewish life in Poland during the German occupation (1915-1918).  These attacks notwithstanding, serious critics recognized his rough writerly talent.  He would later published a great number of works which excelled in their vivid realism.  In his novels, In geroysh fun mashinen, roman (Amid the noise of machines, a novel) (Warsaw, 1928), 394 pp., and 1905, roman (1905, a novel) (Warsaw, 1929), 473 pp., he depicted the years of his youth working with lacemaking machinery in Kalisz.  He describes there the emergence of Jewish small industry and the struggle of the Jewish laborer and the Jewish masses with the banner of the 1905 Revolution in Poland—a second edition of this novel, with a foreword by Yoysef Okrutni, appeared in Buenos Aires in 1953).  He was also the author of the books: Masn, roman (Masses, a novel) (Warsaw, 1929), 400 pp., initially published in Folkstsaytung in Warsaw; Zump, roman (Marsh, a novel) (Warsaw, 1931), 513 pp.; Dos hoyz afn barg, roman (The house on the mountain, a novel) (Warsaw, 1934), 426 pp.; Tsvey veltn, roman (Two worlds, a novel) (Warsaw, 1935), 182 pp.; Zind, roman (Sin, a novel) (Warsaw, 1935), 196 pp.; Dort vu di zhirand falt arayn in yam (There where the Gironde flows into the sea), romantic stories of Belgium and France (Warsaw, 1936), 136 pp.; Shtarke mentshn (Strong people), novellas (Warsaw, 1936), 272 pp.  His biographical novel Bam shvel (At the threshold), published in four parts (Warsaw, 1936), 192 pp., had a major impact; in it he traced a gallery of hundreds of Jewish and Gentile images of Jewish life in Poland, Paris, and elsewhere in Europe in the years between the two world wars.  His final book was: Di printsesin un andere dertseylungen (The princess and other stories) (Warsaw, 1938), 135 pp.
Horontshik lived in Paris and Berlin for several years; he returned in May 1939 to Warsaw, became an internal contributor to Moment, and began to publish a new novel, entitled A yung vayb (A young wife).  At the beginning of September 1939, when the Germans bombed Warsaw, he and the writer Shmuel Vulman escaped from the burning city with the goal of getting to Vilna.  En route when he heard that the Bolsheviks were coming from the other side of Poland, he committed suicide by cutting his own throat.  Vulman managed to bring his body to be buried in the town of Kaluszyn (according to an obituary by Yisroel Rabon in the first edition of the anthology Untervegns [Pathways] [Vilna, 1940]; later, the Bolsheviks published another edition of this anthology with another four pages stuck in, but without Rabon’s article).  After WWII Horontshik’s writings appeared in various collections; a volume of his Geklibene shriftn (Selected writings), with a foreword by Sh. Lastik, was published in Warsaw in 1950 (110 pp.). 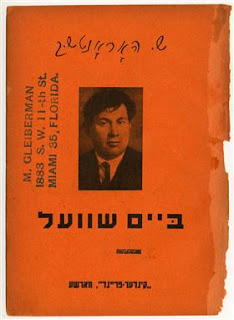