MORRIS (MEYER-FALK) HOFFMAN (August 1, 1885-April 1, 1940)
He was born in Preyl (Preíli), Vitebsk region, Byelorussia.  His father, Avrom-Mortkhe Hakohen, was a cantor and at the same time a sometime follower of the Jewish Enlightenment movement.  Morris studied in religious elementary school and Tanakh and Hebrew grammar with a Hebrew tutor.  In his teacher’s home, he discovered Smolenskin’s Hashaḥar (The dawn) and a variety of Enlightenment works in Hebrew, on his own began early on to write, and sent correspondence pieces to Hatsfira (The siren).  He subsequently left to enter a Russian school with the intention of going to study in Germany.  Then in 1903-1904 his father and then his mother died in succession, and he was obliged to support the family of two sisters and young brother.  He became a Hebrew teacher and later (1906) was compelled to emigrate and join his older brother in South Africa.  He initially worked there with his brother in his business in Koffiefontein (a town in Cape Province), and then he moved to Hopetown (a town also on the Cape) where he performed difficult hard labor, but he apparently learned English and Afrikaans (the language of the Boers).  In 1913 he left for Berlin, married a young girl there named Sonye, daughter of the Utianer rabbi, and a year later they moved together to South Africa, settled (in 1917) in De Aar, a Boer town in the middle of the Great Karoo, a semi-desert region in the Cape, where they opened a business and gradually became more well-off.
In 1905 he published Yiddish poetry in Y. Vortsman’s Di yudishe tsukunft (The Jewish future) in London and in Ts. Prilutski’s Der veg (The way) in Warsaw.  He also wrote in South Africa, and in 1935 he brought out his poetry collection entitled Voglungs-klangen (Meandering sounds) (Warsaw: Futura), 366 pp., in a large format.  The collection begins with “Afrikaner epopeyen” (African epics), a depiction of his town Hopetown, called “Malpnheym” here, and which constitutes one of the most original and most important literary creations in Yiddish from South Africa.  The poem (111 pp.), which was initially published in 1932 in Afrikaner yidishe tsaytung (African Jewish newspaper) in Johannesburg, is replete with characteristic images of Jewish ways of life in the early years of Jewish settlement in secluded regions of South Africa.  He also wrote stories, sketches, and impressions, in which the principal theme circles around the common living experience of Jews with Boers and Blacks (and to an extent with the British).  His prose writings were published by his wife in book form after his death: Unter afrikaner zun (Under the African sun), stories and sketches, with an autobiography by the author and images from various periods in his life (Johannesburg: Kayor, 1951), 296 pp.  He also wrote in Hebrew, and a volume of his Hebrew stories was published by his wife under the same title (in Hebrew) in Israel: Taḥat sheme afrika (Tel Aviv: Masada, 1947/1948), 200 pp.  In 1951 a special edition of his poetry in Yiddish and Hebrew with music by Yirmiyahu Idelson was published: Shire moris hofman (The poetry of Morris Hoffman) (Jerusalem-Tel Aviv: Niv), eleven songs.  Hoffman himself published his poems in various serials, such as: Afrikaner yidishe tsaytung, a weekly; Dorem-afrike (South Africa), a monthly (from the 1920s); Tribune (Tribune); Baginen (Dawn) in Bloemfontein (Free State, South Africa) in 1931; Idishe post (Jewish mail) in London; Foroys (Onward) in Johannesburg in the late 1930s; Basaḥ (Together) and Barkai (Morning star), monthly magazines in Johannesburg.  He was active throughout his life in the Zionist movement.  He died in De Aar. 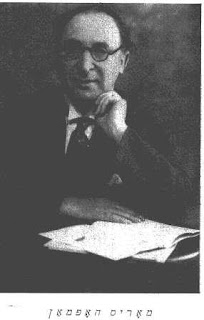