He was a poet, prose author, and playwright, born in Korostishev (Korostyshiv), Kiev Province, Ukraine.  His father Nekhemye, an employee in the timber business, was a learned Jew; his mother descended from the family of the well-known folk musician Pedutser-Kholodenko (Dovid’s sister Shifre, a Yiddish poet, took her mother maiden name as a pseudonym). The family later moved the Volhynian village of Yasnogorod, where they had their own eight desyatina [one desyatina = roughly 2.7 acres] of land, and he and his family worked it.  At age five Hofshteyn was turned over to a religious primary school, and at age nine he left to live and study with his grandfather, Rabbi Akivele, who was an elementary school teacher in Korostyshiv.  At the same time he studied Russian and Hebrew for two years with a private tutor.  He then left to rejoin his parents in the village, spent two years studying with a teacher imported from Zhitomir, and then worked in the village economy, just like his ten younger brothers and sisters.  At age seventeen he became a teacher in a neighboring village and continued his education on his own.  In 1907 he moved to Kiev, went through the sixth class in high school as an external student, went on to serve in the military (1912-1913). He then returned to Kiev where he passed the baccalaureate examination and married Hinde-Gitl Khayet. He later studied in a Kiev commercial institute, and audited lectures in the philology faculty of the University of Kiev. His wife died in 1920, and he was left with their two children.

He began writing poetry at age nine, initially in Hebrew, and later (under the pen name D. Naumov) in Russian and Ukrainian, as well as in Yiddish, in which he debuted in print in 1917 in the Kiev newspaper Naye tsayt (New time); his first piece was a study entitled “Fun dorf” (From the village) which appeared on September 28, and thereafter a poem “Di nase nets fun tribun khezhvn-tsayt” (The wet net of the tribune of Heshvan) on October 23. From that time forward, he contributed work to a variety of Yiddish literary publications and assumed a leading position in Jewish literary life, was one of the administrators of “Kultur-lige” (Culture league), a lecturer in literature and drama studios, editor of a series of poetry publications, and contributed to the anthologies Eygns (One’s own, 1918-1920), Oyfgang (Afresh, 1919), and Baginen (Dawn, 1919). He was later to be one of the founders and the editor at the publishing house Vidervuks (Renewal), which brought out a series of pedagogical collections for young Yiddish poets, and he wrote prefaces to a number of these anthologies. He also edited the children’s magazines Shretelekh (Elves) and Kling-klang (Cling-clang) and Moyshe Khashtshevatski’s collection of translations from Russian poets. Over the years 1919-1922, he brought six collections of poetry—the first being Bay vegn (At the road) (Kiev, 1919). In late 1920 he moved to Moscow, was selected to join the management of the Moscow circle (later, union) of Jewish writers and artists, and he was one of the editors of Shtrom (Current). In the declaration of the Shtrom group (see its second number), he proclaimed it was a specimen of “the calling of literature in the revolutionary era.” In early 1922, he signed—together with Nokhum Oyslender, Shmuel Godiner, Yekhezkl Dobrushin, and Avrom Vevyorke—a reply to Moyshe Litvakov’s attack on Moscow Yiddish writers who conducted themselves, according to Litvakov’s complaint, with contempt concerning cooperation with the newspaper Der emes (The truth) which Litvakov edited. In 1923 Hofshteyn placed his signature on a memorandum to the government in protest against the persecutions of Hebrew, and this led to conflict with the Communist “Yidsektsye” (Jewish section). The general assembly of Jewish literary and artistic leaders in Moscow expressed “its deepest regrets that, under the memorandum concerning Hebrew. we find the signature of the poet Dovid Hofshteyn. We hold that as a result he has excluded himself from the family of Jewish cultural leaders.” The editorial board of Shtrom removed him from the editors.

Not seeing any prospects for himself, Hofshteyn left Russian in 1923 and moved for a short period of time to Berlin. During this time, he published poems in the New York journal Di tsukunft (The future), among them the dramatic poem, “Shoyl, der letste meylekh fun yisroel” (Saul, the last king of Israel) (July 1924); the slapstick “Meshiekhs tsaytn” (Messianic times) (May 1925); and translations of Pushkin (January 1925) and of Dubnova-Erlich’s “Muter-lider” (Mother poems) (September 1923), among others. In all, he composed five plays while in Berlin, only three of which were published. He did publish in Berlin a poetry collection entitled In tovl fun vent (On the tableau on the walls), but he found no appropriate atmosphere for his work in Germany. In April 1925, he moved with his second wife, Feyge Biberman, to the Land of Israel, and published Hebrew poetry in the Israeli press—Haarets (The land), Davar (Word), Kuntres (Booklet), Hapoel hatsair (The young worker), Sefer hashana shel erets-yisrael (Yearbook for Israel) for 1925, Hadim (Echoes), and Shabesdike baylages fun davar (Sabbath supplements for Davar), in which, among other items, he published chapters of memoirs concerning the poet Osher Shvartsman. His moods at the time are captured in the words of his preface, written in Tel Aviv, to a booklet of poems by the Hebrew-Yiddish poet Yankev-Dovid Kozman (1900-1980): “I wish I could believe that the tremendous shocks and pains of the last years brought newly cemented currents into our people’s psyche and the old national borders were just a little erased. The sense of a general Jewish self-knowledge would deepen and, as in all difficult times strengthen itself, now purely mystical moods would…withdraw from all cabalisms the threads of joy and life’s ecstasy, and transcend all barriers that separate in our lonely Jewish life one people from another.” He apparently felt lonely in Israel and was drawn to return to Russia, where he had left his two sons, Shammai and Hillel—see Hofshteyn’s poem “Kegure zevim” (Like wolf-cubs), in Hapoel hatsair (Tel Aviv) 19 (1925-1926), p. 5.

So, he returned to Moscow and worked there in the Sholem-Aleichem drama studio. His difficult economic situation, especially after his wife gave birth to a daughter, brought him to the decision that he had to return to Russia. On April 26, 1926, he published a letter of remorse in Emes, in which he stressed that he wanted “to resume his place among those who are building the life of Jewish working masses in the Soviet Union.” And, that April 26, at a meeting of Moscow Yiddish writers, he repented his signature on the memorandum on behalf of Hebrew, and the meeting accepted a resolution in which was written: “An opportunity has been established for joint work with the Hofshteyns.” At the end of 1926, his signature was placed beneath the declaration of “association of revolutionary Jewish writers in Ukraine,” who declared, among other things, that “all remnants of nationalistic aftereffects must be exterminated.” He was one of the initiating group which issued an appeal “to all Jewish revolutionary writers in Ukraine” concerning joining the All-Ukrainian Union of Proletarian Writers (VUSP"P) and founding a Jewish section in it. At the first conference of Jewish Proletarian Writers, in Ukraine (1927), he was selected for the office of the Jewish section of VUSP"P, and when they began publishing the organ of their group, the monthly Prolit (Proletarian literature), in March 1928, he joined the editorial board. But, then a new controversy arose at the meeting with the incitement campaign against Leyb Kvitko—known in the history of Yiddish literature in the Soviet Union as “storybook-Kvitko,” when he published a cycle of “caricatures” which were qualified as a political performance against the party leadership, an “expression of rightwing assault in literature.” In October 1929, the Jewish section of VUSP"P adopted a resolution in connection with this conflict in which it was said that “Hofshteyn’s recent errors demonstrate that, while in a proletarian writers organization, he had not liquidated his past petty bourgeois nationalistic viewpoint,” and he was expelled from VUSP"P. Similar incidents with writers organizations took place with Hofshteyn in subsequent years, but this did not undercut his active creative work. As earlier, he took an active part in the life of a man of letters, published his poems, translated, and published (together with other writers, pedagogues, and literary scholars) textbooks for Jewish schools—readers on Yiddish language and literature, together with Y Yakhinson and Elye Spivak; a volume entitled Teorye fun literatur, poetik (Theory of literature, poetics), together with Fume Shames; and a drama for children Spartak (Spartacus).

Aside from poetry, dramas, and translations, he was working on prose works—e.g., a chapter from his autobiographical novel Yorn (Years) was published in the journal Farmest (Competition) 5-6 (in Kiev). He also published translations of Der soykher fun venedik (The Merchant of Venice) by Shakespeare for the Kiev Yiddish State Theater and Nora by Ibsen for the Odessa Yiddish State Theater, among other works. In 1939 Hofshteyn’s fiftieth birthday was celebrated; he was decorated by the Soviet government with an honorary distinction, and the state publishing house translated a book of his Yiddish poetry in his honor into Russian, entitled Novye prostory (New scope). Overall, Hofshteyn translated a great deal from Russian, Ukrainian, and German, especially works of the Ukrainian poet Shevchenko.  He also co-edited an anthology of Yiddish literature in Ukrainian.

During the years of WWII, Hofshteyn was a member of the Jewish Anti-Fascist Committee.  From July 1941 until August 1944, he lived in Ufa, the capital of Bashkiria, and published poems in the newspaper Eynikeyt (Unity), as well as in other serial publications. He returned to Kiev, and in 1946 he was honored by the government with a medal “for heroism” at a time of war, completed a play entitled Muter (Mother), and in 1948 the Moscow publisher “Der emes” brought out a volume of his Oysgeveylte verk (Selected works). Thus ended the story of the creative path of one of the groundbreaking and active builders of Soviet Yiddish literature. He was arrested on September 16, 1948—the first of the Yiddish writers connected with the sad, celebrated “affair of the Jewish Anti-Fascist Committee.” He was one of thirteen sentenced to death and was shot on August 12, 1952. In 1987 Feyge Biberman-Hofshteyn established the Dovid Hofshteyn Prize for Literature and Art, which the union of Jewish writers and journalists in Israel give out annually on the day of the poet’s birth.

He edited and compiled, among others, the following: Felker zingen (People sing), together with Itsik Fefer (Kiev: Ukrainian State Publishers for National Minorities, 1939), 412 pp.; the poetry of Vladimir Mayakovsky, with Moyshe Khashchevatski (Kiev, 1940), 157 pp.  He rewrote into modern Yiddish Yitskhok-Avrom Eykhel’s Reb henekh oder vos tut men damit (Reb Henikh, or what is to be done?); and Arn-Hale Volfzon (Aaron Wolfssohn), Laykhtzin un fremelay (Frivolity and piety), a comedy from the Berlin Enlightenment (Kiev: State Publ., 1933).  A volume of Hofshteyn’s poetry in Russian translation, with an introduction by Arn Vergelis, was published in Moscow in 1958 (with a bibliography). 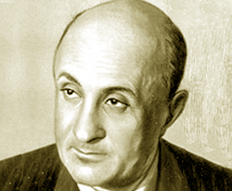