APOLINARY-MAKSYMILIAN HARTGLAS (April 7, 1883-March 22, 1953)
He was born in Biała Podlaska, Shedlets (Siedlce) district, Poland; his father was a private lawyer.  He would later became a well-known lawyer himself with a tempestuous political career which began when he was a student and was banned from Warsaw University for taking part in a demonstration against an anti-Semitic performance at a Polish theater.  Later, the Tsarist authorities banned him for a time from the lawyer’s profession.  Under the occupying German authorities during WWI, he was turned over for court martial for defending Polish students against the brutal handling by German gendarmes, and in liberated Poland he was once again excluded from the lawyer’s profession for Zionist activities.  He became renowned for his role in the rehabilitation trial of Rabbi Shapiro of Plock in 1920.  He was one of the leaders of the Zionist faction in the founding Polish Sejm and a deputy to the second Sejm, in which he belonged to the radical opposition in the Jewish Kolo (club of deputies) and for a time the president of Kolo as well.  He was also an established journalist, contributed to various Zionist publications in Polish and Russian, and edited Zionist periodicals in Polish such as Życie Żydowskie (Jewish life) and Tygodnik Żydowski (Jewish week).  He would later turn to writing in Yiddish.  From 1920 he was a regular contributor to: Haynt (Today) in Warsaw, in which he published articles on Zionist as well as general Jewish issues, to the periodical Hoydesh (Month) in 1921, and to other Zionist publications.  In book form: Seym-reder, 1919-1922 (Speeches at the Sejm, 1919-1922) (Warsaw: Yudisher natsyonal-rat in Poyln [Jewish national council in Poland], 1923), 156 pp.  In died in Israel.  There is a street in Tel Aviv named after him. 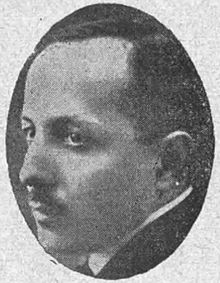