SHAYE RABINOVITSH (ISAIAH RABINOVICH) (November 22, 1904-July 19, 1972)
He was a Hebrew literary critic and essayist, born in Khodorkov (Khodorkiv), Ukraine.  He graduated from teachers’ seminary and Kiev University.  From 1924 he worked as a Hebrew teacher in Winnipeg, Canada, later serving as director of the Farband (Jewish National Workers Alliance) schools in Toronto.  He received his academic degrees from the University of Toronto (1935) and the Jewish Theological Seminary (1950).  From 1960 he was professor of modern Hebrew literature at a college in Chicago.  He was the author of works of Hebrew literary criticism.  From time to time, he wrote in Yiddish essays and stories in: Idisher zhurnal (Jewish journal) in Toronto; Keneder odler (Canadian eagle) in Montreal; Fraye arbeter shtime (Free voice of labor), Tsukunft (Future), Idisher kemfer (Jewish fighter), and Svive (Environs) in New York; and Di goldene keyt (The golden chain) in Tel Aviv; among other serials.  A volume of his stories was published posthumously: Likht brent (A candle burns) (Tel Aviv, 1975), 309 pp.  He left in manuscript a long poem in Yiddish, entitled “Mayrev-kanade” (Western Canada).  He died in Toronto. 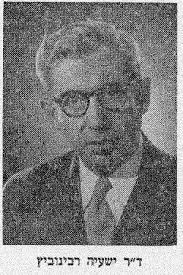