YITSKHOK IVRI (November 12, 1908-July 31, 1987)
The Hebraized surname of Yitskhok Mishkinski, he was born in Bialystok, Russian Poland.  He studied in the Bialystok and Grodno yeshivas, later graduating from the Tachkemoni seminary in Warsaw.  Over the years 1928-1933, he attended the Universities of Berlin and Basel, and the Hebrew University in Jerusalem.  He studied philosophy, history, and literature.  From 1935 he was contributing to the press in the land of Israel.  In 1936 he became a member of the editorial board of Davar (Word), as well as a regular contributor to Hapoel hatsayir (The young worker), Davar hashavua (Word of the week), and Kol yisrael (Voice of Israel—formerly, Kol yerusholayim [Voice of Jerusalem]).  He left Davar in 1954 and became a member of the education department of the Jewish Agency in New York.  He published essays on modern Hebrew literature and cultural life in the state of Israel (in English).  He placed writings in Hadoar (The mail) and had a monthly report in the journal Bitsaron (Fortress) in New York.  From time to time he also contributed to Byalistoker shtime (Voice of Bialystok), Tog-morgn-zhurnal (Day-morning journal), Di tsukunft (The future), and Folk un velt (People and world)—in New York; and Keneder odler (Canadian eagle) in Montreal.  He also published articles in Congress Weekly and translated into Hebrew novels, stories, and plays from English, Yiddish, German, and Polish, such as: William Saroyan, Hakomedya haenoshit (Human Comedy) (Tel Aviv: Am oved, 1945/1946), 285 pp.; Saroyan, Mivḥar sipurim (Selected stories) (Tel Aviv: Am over, 1946/1947), 274 pp.; Nancy Wilson Ross, Yad smol hi haḥolemet (The Left Hand Is the Dreamer) (Merḥavya, 1949), 390 pp.; Meḥazit leḥazit (From front to front) from English; Howard Smith, Barakevet haaḥarona miberlin (Last Train from Berlin) (Tel Aviv: Ts. Lainman, 1943), 243 pp.; Quentin Reynolds, Hapetsuim lo zaaku (The Wounded Don’t Cry) (Tel Aviv: Ts. Lainman, 1941/1942), 226 pp.; and stories by Stefan Zweig, Arthur Schnitzler, Dorothy Parker, Damon Runyon, and Mark Twain, among others.  He also contributed to anthologies for Hadoar, Davar, and Aḥdut avoda (The unity of labor), among others. Using the pen name Y. Mishal, he published in English a pamphlet entitled Zionist (New York: Hadassah).  He was a member of the Agudat Hasofrim (Association of [Hebrew] writers) in the state of Israel, of the Tel Aviv journalists’ association, and of the Y. L. Perets writers’ association.  Among his pseudonyms: Y. Ben-Taakov, Tsvi, Tsofe, Y. Ḥuker, Avi-Yaakov, Avi-Benyamin, and Politikum.
In early December 1964 he was severely injured in an automobile in New Brunswick, New Jersey.  He was among the most important Hebrew journalists for issues of the day, both Jewish and general, and after settling in the United States he carved out an honored place in Yiddish journalism as well.  His translations from other languages enriched Hebrew literature not only with works from world literature, but they also contributed to the enrichment of modern Hebrew stylistics.  He translated into Hebrew Sh. Berlinski’s A lebn geyt oyf (A life arises) (Warsaw, 1937) under the title Beshaḥar ḥayim (Life at dawn) (Tel Aviv: Am oved, 1950), 191 pp.  He edited the collection Yalkut lehumor velesatira, misifrut haolam umisifrut idish (Collection of humor and satire, from world literature and from Yiddish literature) (Tel Aviv: Sh. Shreberk, 1950), 310 pp., in which the translations were mostly his own.  He also translated for Habima [the Hebrew theater company] Arthur Miller’s drama Moto shel sokhen (Death of a Salesman) (Tel Aviv, 1951) and R. C. Sherriff’s Mis meibl (Miss Mabel) (Tel Aviv, 1950).  He also contributed to Sefer hashana shel haitonim (Newspaper yearbook) in Tel Aviv.  He was a press official for the United Jewish Appeal. 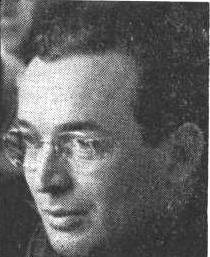