YANKEV (JAKUB) EGIT (September 27, 1908-1996)
He was born in Borislav (Boryslaw), eastern Galicia, to poor parents.  At a young age he became a laborer and was active in the Jewish labor movement.  Over the years 1930-1933, he was co-editor of the Lemberg weekly newspaper Unzer veg (Our way), central organ of Labor Zionism in eastern Galicia.  He spent the years WWII in the Soviet Union.  In 1945 he was a member of the central committee of liberated Jews in Poland, later chairman of the district Jewish committee of Wrocław.  He was a cofounder of various economic institutes, children’s homes, and Jewish public schools in Lower Silesia.  Over the years 1946-1948, he was the publisher and co-editor of the newspaper Niderslezye (Lower Silesia) and Nowe życie (New life).  He was director (1950-1953) of the publishing house “Yidish bukh” (Yiddish book) in Warsaw.  He took part in the production of Y. l. perets zamlbukh (Y. L. Perets anthology), published by Yidish bukh in 1952.  He spent the years 1954-1956 as director of a Polish publishing house in Warsaw.  He also contributed work to Nay lebn (New life) and Yidishe shriftn (Yiddish writings) in Warsaw.  In book form: Tsu a nay lebn, tsvey yor yidishe yishev in niderslezye (Toward a new life, two years of a Jewish settlement in Lower Silesia), with a foreword by Kh. Stolyar (Wrocław: Niderslezye, 1947), 84 pp.  In 1947 he left Poland and settled in Toronto, Canada.  For a short time he contributed to: Der idisher zhurnal (The Jewish journal), Canadian Jewish News, and Jewish Standard—in Toronto; and Keneder odler (Canadian eagle) in Montreal.  He organized the committee to publish Who’s Who in Canadian Jewry.  He was a member of the Council of the Canadian Jewish Congress and director of the United Organizations in the Histadruth campaign in Toronto.  Among his pen names: Y. Barski.  In 1991 he published a memoir entitled Grand Illusion (Toronto: Lugus), 175 pp.  He died in Florida. 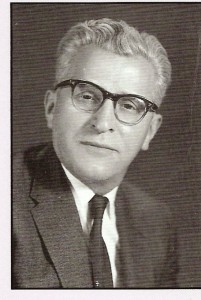