SARAH B. SMITH (July 15, 1888-April 29, 1968)
She was born in a town in Hungary, the daughter of Eliezer-Nisn Branshteyn.  She received a Jewish education.  In her youth she moved with her parents to Budapest, where she went through a middle school.  At age fifteen she came to the United States.  She worked in making blouses in sweatshops.  In 1908 she debuted in print with stories in Forverts (Forward) in New York.  That year she became a reporter for Morgn-zhurnal (Morning journal) in New York—among other items, she described in it the Triangle Shirtwaist Factory fire of March 1911.  With the founding of Tog (Day) in 1914, she became a regular contributor to the newspaper.  She was the first Jewish female writer to describe the lives of factory workers in New York.  Her years of reporting in the criminal courts gave her a wealth of material for realistic images of the underworld.  Her series “Bilder fun kourt” (Images from the court) and “Far vos mentshn getn zikh” (Why people get divorced) were reprinted in various newspapers in America, Canada, and England, and brought her an enormous readership.  Aside from her work for Tog, for which she published a dozen newspaper novels and hundreds of short stories, she also published her depictions in New York’s Haynt (Today), Froyen-zhurnal (Women’s journal), and Der amerikaner (The American), among others.  She also published stories in the Anglophone press.  She authored a play in English, entitled Piper Paid, which was first performed (1934) on the English-language stage in Philadelphia and later on Broadway in New York.  She also wrote a scenario for a film: My Girl Tisa.  In book form: Di froy in keytn, roman (The woman in chains, a novel) (New York: Literatur, 1919), 115 pp.; Ver iz shuldik? (Who is guilty?) (New York: Literatur, 1919), 255 pp.  She died in Babylon, New York. 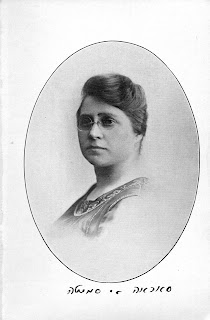