YITSḤAK OGEN (YITSKHOK NITSBERG) (June 29, 1909-May 26, 1991)
He was born in Vilna and studied in religious elementary schools and the Vilna Hebrew high school.  In 1929 he made aliya to the land of Israel.  He was employed in construction and agriculture.  He attended a teachers’ seminary in Jerusalem.  In 1932 he left for Vienna where he studied at university, participated in self-defense of Jewish students in fighting against anti-Semitism, was arrested, spent several weeks in jail, and was then deported from Austria.  He then returned to Israel and took up teaching and literary work.  He began writing at an early age, and he published his first Hebrew poem in Hamishtala (The [plant] nursery), a weekly brought out by the youth movement “Hakokhav” (The star) and edited by A. Luboshitski.  At age seventeen he received an award from the Warsaw Yiddish illustrated journal Velt-shpigel (World mirror) for his story “Mayn ershte libe” (My first love).  He also published articles in other newspapers.  He contributed as well to such Hebrew periodicals as: Gilyonot (Tablets), Moznaim (Balance), Doar hayom (Today’s mail), Hadoar (The mail), Niv (Expression), Musaf ledavar (Additional words), Hamashkif (The spectator), Bitsaron (Fortress), and Baderekh (On the road).  In 1940, he and Y. Arikha were editing Hadifdefet (The pad of paper), a literature book for pupils in Hebrew schools.  Among his works of poetry: Behizdakekhut, shirim (Purifying, poems) (Tel Aviv: Gilyonot, 1934/1935), 169 pp.; Beshaar hakelaya vehapele, shirim (At the gateway of the destruction and the wonder, poetry) (Tel Aviv: Gilyonot, 1938/1939), 53 pp.; Yesh moledet leish, shirim (There is a homeland for man, poetry) (Tel Aviv: Ts. Linman, 1939/1940), 61 pp.; Bezaaf lel, shirim (Angry at the night, poetry) (Jerusalem, 1942), 56 pp.; Al gesher halel, shirim (On the bridge of the night, poetry) (Tel Aviv: N. Tverski, 1946/1947), 217 pp.; in the anthology Shira ivrit (The Hebrew poem) (Tel Aviv, 1948).  He died in Tel Aviv. 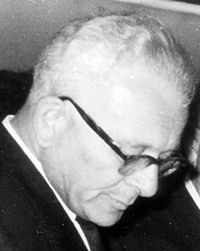