MOSHE SAMBATYON (July 22, 1913-1986)
He was born in the village of Dondușeni, Bessarabia.  On his father’s side, he descended from the Bal-Shem-Tov.  He studied in religious elementary school and yeshivas, as well as in the yeshiva of Rabbi Yude-Leyb Tsirelson in Kishinev.  At age thirteen he published his first Hebrew poem in Haolam (The world) in London.  He also wrote stories.  While in yeshiva, he published a monthly journal entitled Sambatyon.  Later, he turned up in Budapest (Hungary), continued his studies there, and at age eighteen received ordination into the rabbinate.  At the same time, he surreptitiously studied with Professor Yehuda-Arye Ludwig Blau at the Budapest Theological Seminary and received his doctoral degree in Jewish studies.  He later studied as well at the University of Budapest and wrote a dissertation on the philosophical foundation of the Talmud, for which he received his Ph. D.  Sambatyon was primarily a Hebrew lexicographer, but he began his writing career in general in Yiddish.  As a youngster he already published in Shmuel Shvemer’s biweekly Yudishe visenshaft (Jewish scholarship) in Jassy (Iași), Romania.  He later published Jewish religious songs in Zalmen Rozental’s daily newspaper Unzer tsayt (Our time) in Kishinev; he penned stories and fables for Yud (Jew) and Tageblat (Daily newspaper) in Warsaw, and he published aphorisms in Yoysef Apelboym’s weekly newspaper Di vokh (The week) in Kishinev.  In 1931 he was editor of the weekly Transilvanishe prese (Transylvanian press) and in it published stories, poems, tales, reviews, and the like.  In 1932 he led the “Brit sambatyon” (Sambatyon’s covenant), an underground, military organization which fought against the Kuzists (national Christian party) in Romania.  On the eve of Yom Kippur 1934, he boarded a Romanian tugboat for the land of Israel, where he became a construction worker, while at the same time continuing to write and prepare for publication his Shemon ivri (Hebrew nomenclature).  In 1935 he established and directed a senior high school for Jewish studies, “Yahadutan” (Jewishness); in 1936 he founded “Brit yeshurun” (Covenant of Jeshurun), an organization for religious youth.  In 1939 his Shemon ivri appeared in print and was awarded a prize from the city of Tel Aviv.  He founded “Makhon lesignon vearikha” (Institute for style and editing)—“Mesagnen.”  He served as co-editor of Hamashkif (The spectator) and wrote stinging polemics in it.  He published a rebellious book entitled Minshar hanoar hayehudai lehauma habritit (Manifesto of Jewish youth to the British nation) (Tel Aviv, 1936), 40 pp.  He called Jewish youth into war against England.  The book was a kind of program for the underground organizations Hagana, Irgun, and Leḥi (freedom fighters).  He appeared publicly in Jerusalem’s Bet Haam (House of the people) to give a forceful speech against the British White Paper, and he marched at the front of a popular demonstration and was wounded.  In 1940 his volume Lashon-nofel-al-lashon (Play on words) (Tel Aviv), 73 pp., was published; and in 1942 his Ivrit sambatyonit (Sambatyon’s Hebrew) (Tel Aviv), 20 pp., appeared, and it raised a storm in linguists’ circles.  In 1943 a celebratory volume, Sefer sambatyon (Volume for Sambatyon) (Tel Aviv), appeared in print; it was edited by Yaakov Rabinowitz and Dr. Rafael Alkalai, with contributions from Klausner, Tursini, Fikhman, Shneur, Klatskin, and others.  In 1945 he founded the association of Israeli writers and journalists (Eshkolon).  The next year there appeared his Ḥaye sambatyon (The life of Sambatyon), “the epic story of a superman”; in 1947 his Mimron (Collection of sayings), an assortment of aphorisms, sayings, idioms, both Jewish and general (Tel Aviv), 112 pp.; and in 1949 his controversial volume, Shpinoza, ganav sifruti (Spinoza, plagiarizer) (Tel Aviv), 166 pp.  He claimed there that Spinoza created nothing original and that everything connected to Spinoza was plagiarized from Jewish and Gentile philosophy.  From 1938 he ran the Avisham, an institution concerned with creating in Hebrew terminology for various realms of life in the state of Israel.  After the state of Israel was proclaimed, he left politics and engaged solely in writing.  He contributed to such Israeli newspapers as: Davar (Word), Haboker (This morning), Hatsofe (The spectator), Yediot aḥaranot (Latest news), Hapoel hatsayir (The young laborer), and Lemerḥav (Into the open)—writing under the pen name Simantov in the last two of these—among others.  His crowning achievement was Milon talmudi entsiklopedi (Encyclopedic dictionary of the Talmud), 2 vols.  The first volume appeared in Tel Aviv in 1955, the second in Montreal in 1964 with assistance from the Quebec government and the Canadian Jewish Congress.  A third volume remains in press.  As Professor A. Kaminka wrote: “He [Sambatyon] brought back to life the world of the Talmud and fertilized as well the field of the spoken Hebrew language which is nourished by the language of the Talmud.  Generations have eagerly awaited such a scholarly Talmudic encyclopedia, and we are now honored that a young Israeli writer with his own two hands has accomplished this for all academia.”  From 1957 he was living in Montreal, Canada, and was working on his Talmudic dictionary.  He also contributed to Keneder odler (Canadian eagle) in Montreal. 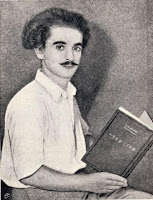