YENTE SERDATSKI (SERDATZKY) (September 15, 1877-May 1, 1962)
She was born in Aleksot (Aleksotas), near Kovno, Lithuania.  Her father Yehoshua Raybman, a dealer in used furniture, was a scholar and gave his daughter a basic Jewish education.  She attended religious elementary school for girls and studied with yeshivas boys.  At age thirteen she took up an apprenticeship with a seamstress.  She later had her own shop.  At the same time, she was reading books in Russian, German, and Hebrew.  In 1905, when she had already become a mother herself, the writer in her awakened and she left for Warsaw, where she debuted in print in the Warsaw Yiddish-language daily newspaper Der veg (The way), edited by Bal-Makhshoves, with a story entitled “Mirl” and later published a second story in the same newspaper, now edited by Y. L. Perets who encouraged her to write.  In 1907 she immigrated to the United States.  She lived her first years there in Chicago, and she later ran a soup kitchen in New York and at the same time published sketches, tales, stories, one-act plays, and dramatic impressions in: Fraye arbeter-shtime (Free voice of labor), Di naye varhayt (The new truth), Fraye gezelshaft (Free society), Di tsukunft (The future), Fraynd (Friend), Gerekhtikeyt (Justice), and in Avrom Reyzen’s Dos naye land (The new country), among others—in New York.  Over the course of some years, Serdatski was a steady contributor to Forverts (Forward) in New York and regularly published her stories there, but in 1922, due to a conflict over payment, she left the newspaper.  She withdrew completely thereafter from circles of writers and made a living by renting furnished rooms in New York.  Over the years 1949-1955, she again became active in literary matters and contributed to Y. Libman’s Nyu yorker vokhblat (New York weekly newspaper), in which she published around thirty stories, as well as remembrances of Y. L. Perets.  In book form she published Geklibene shriften (Selected writings) (New York: Hebrew Publishing Company, 1913), 270 pp., including sketches, novellas, one-act plays, and with a separate section entitled “Legends and Tales”—this volume also included the dramatic works: Af der vakh (On guard), Tsurikgekumene (Those who returned), Bronke (Branka), and Baym vigel (By the cradle).  She also published the one-act plays: “Shpileray” (Easy task), in Di tsukunft (August 1913); “Oh, di liebe” (Oh, love), in Forverts (June 11, 1921); “Di grine” (The greenhorn), in Forverts (October 18, 1921); and “Ayferzukht” (Jealousy), in Forverts (January 23, 1922).  She died in New York.  “A writer of fiction with an authentic writer’s temperament,” noted Zalmen Reyzen, “Serdatski has dealt primarily with the quiet tragedies of women, her longing for the joy of love, her loneliness, the deluded hopes of the young, and the like.  A number of her pieces in the book express the mood of party activists of the past and their disappointments.  She also has some novellas drawn from the life of Jewish intellectuals from the old country and in America.”  In the words of B. Rivkin: “She truly has for herself a corner of life, a set circle of people, whom she follows step by step, ever since she took up pen in hand; inasmuch as these people are not always the same, they change, they grow, become agitated, seethe and put up with it, just like real living people; just as they were not in Russia what they have become later, when they have moved to America; because they have spent ten-to-fifteen years in America, they have left behind traces; they have conformed, grow at home, and become naturalized in their American environs; because their past, together with the American influences, have created of them a type of Russian radical of old in the United States.  In short, this circle of people on whom Yente Serdatski has fixed her gaze are the Russian Jewish revolutionary youth who survived the reaction and departed for America in order to be restored.”  “Yente Serdatski was a woman writer,” wrote Yankev Glatshteyn, “in the literal sense of the term.  She wrote about the Jewish woman.  All of her stories dealt with the first conscious awakening efforts and disappointments of the Jewish woman.  We have in America a number of such specialized women writers, such as Miriam Karpilov and Rokhl Lurye, among others.  Serdatski is to be counted among the most talented women storytellers….  In recent years she frequently has worked with Itshe Libman’s [Nyu yorker] vokhblat.  She published in it several robust pieces and they are surely getting even better, when people take upon themselves the good deed to review Yente Serdatski’s literary heritage; perhaps people will be able to select a volume of stories from several of her older and later works and erect a gravestone for this angry writer who was mostly perhaps at war with herself.” 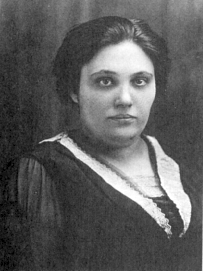