MUNYE (SHMUEL) NADLER (November 25, 1908-August 10, 1942)
He was born in Gline (Glinyani), near Lemberg, in Galicia.  He studied in religious elementary school and in a state school.  At age eleven he entered the yeshiva of the city’s rabbi, Meyer Shapiro, and later he attended the Jewish high school in Lemberg.  His literary activities began in Hebrew.  In 1922 he debuted in print with a poem in the monthly Deglanu (Our banner), for which he became a regular contributor.  He also placed work in the Frankfurt journal Moriya (Moriah) and in London’s Haolam (The world).  He later contributed to religious Yiddish periodicals: Beys yankev (House of Jacob) in Lodz; Yavne (Yavna), Dos naye togblat (The new daily newspaper), and Der morgen (The morning) in Lemberg; Yidishe arbayter-shtime (Voice of Jewish labor), Der flaker (The flare), Yugend-kreftn (Talents of youth), Der yud (The Jew), and Dos yudishe togblat (The Jewish daily newspaper) in Warsaw.  He edited the literary supplement to Dos yudishe togblat and Ortodoksishe yugend-bleter (Orthodox youth sheets) in Warsaw.  In 1930 he edited the weekly newspaper Dos yudishe vort (The Jewish word) in Kolomaye.  In 1930 he also published three booklets: Rus (Ruth), a poetic reworking of the book of Ruth into Yiddish (Lodz: Beys yankev), 24 pp.; Sefer hayovel (Jubilee volume) in Hebrew, which received a warm reception by Hillel Tsaytlin, Moshe Klaynmal, and L. Fayngold (Lodz: Masora), 361 pp.; and at the end of the year, Der veg tsu der zun (The way to the sun) (Kolomaye: Yahadut), 62 pp.  In 1933 he published a lengthy poem, Besht simfonye (Symphony of the Bal Shem Tov) (Warsaw: Golder), 144 pp., fragments from which had earlier appeared in Ortodoksishe yugend-bleter.  In manuscript, Nadler had a poetic retelling in Yiddish of Shir hashirm (Song of Songs) and the major part of a planned “History of world literature” (fragments also earlier published in the Hebrew monthly Deglanu and in Yiddish in Beys yankev).  Because of Nadler’s truly positive bonds to the Yiddish language and literature, he was compelled to leave Yudisher togblat, but this was only a prelude to his transformation.  In 1933, about the same time as his religious chant Besht simfonye appeared in print, he composed a poem—“Tsum avangard” (To the avant-garde)—published in the Lodz Communist journal Di literarishe tribune (The literary tribune), and in a public lecture at the Warsaw literary association, he described his “passage from God to man.”  He joined the leftist group of writers.  This sharp transition from a hopeful, young Aguda poet to the extreme left wing made a huge stir in both religious and secular circles.  That same year Nadler departed for Paris, where he worked for the Communist daily Di naye prese (The new press) and in the leftist movement.  He studied for a time at the University of Cannes and graduated as a mechanical engineer, but his profession remained the pen.  He became night editor and secretary to the editorial board of Di naye prese, for which (using such pen names as Galitsin, Sh. N., Sigma, and A. Flaner) he wrote political articles, feature pieces, reportage works, interviews, literary surveys, scholarly essays, theater and movie reviews, and often as well he filled out the children’s corner with problems, jokes, and riddles.  He also wrote fashion reports for the women’s corner.  He was extremely active under the Nazi occupation: secretary of the illegal writers’ association; editor of the underground Communist Jewish press and a French-language bulletin J’accuse! (I accuse!); leader of the resistance group of radical Jewish intellectuals, until the Nazis caught him, tried him, and shot him on August 10, 1942.  His wife Eydl, who survived the partisan struggles of the Maquis, successfully salvaged a package of Nadler’s manuscripts, including a series of poems and ten chapters of an unfinished autobiographical novel.  A chapter of the novel with two poems was published in Yizker-bukh tsum ondenk fun 14 umgekumene parizer yidishe shrayber (Remembrance volume to the memory of fourteen murdered Parisian Jewish writers) (Paris: Oyfsnay, 1946), pp. 129-44, together with several fragments of his Besht simfonye. 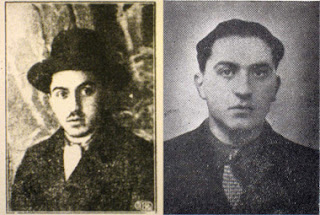