YEHALEL (October 5, 1844-November 29, 1925)
The pseudonym of Yude-Leyb Levin, he was born in Minsk, into a merchant family.  He received a sternly religious education, but at age fourteen he became absorbed in books of the Jewish Enlightenment.  His first poem, “Petsae ohev” (A lover’s wounds), was published in the anthology, Hakokhavim (The stars), edited by Yisrael Meir Vohlman, in 1865.  After 1867 he was living in Zlatopol, Kiev district, where he was a bookkeeper for the owner of a sugar factory, Elazar Brodsky.  He was one of the most prominent contributors to Smolenskin’s Hashaḥar (The dawn) and gained fame for his socially-themed poetry.  He also wrote for Aharon Liberman’s Haemet (The truth) and conducted a correspondence with Liberman.  In 1881, under the impact of the Kiev pogrom, he became a fighter on behalf of the idea of “Ḥibat tsiyon” (Love of Zion).  Because of his activities on behalf of a love of Palestine, he was forced to leave Kiev, and he settled in Tomashpol (Tomashpil), where he was again employed by Brodsky’s factory.  When the Bolsheviks in 1918 nationalized the factory, he moved back to Kiev where he lived with great privation and loneliness, a forgotten man.  His last poems appeared in Hashaḥar in 1925.  He wrote little in Yiddish.  In his first article in Y. Y. Linetski’s and A. Goldfaden’s Yisroelik (Lemberg, 1875)—entitled “Tsi bedarf men shrayben hebreish?” (Should one write in Hebrew?)—he defended the idea that to education the masses, one should speak in their language and commit oneself against the highly Germanized Yiddish of Ayzik-Meyer Dik.  He later published: satirical journalistic features in both volumes of Sholem-Aleykhem’s Yudishe folks-biblyotek (Jewish people’s library) (Kiev, 1888 and 1889); articles in the weekly newspaper Der yud (The Jew) 9 (1899); and the collection Funken (Sparks), edited by Pergosin and Yerukhemzon (1908).  He dies in a Kiev hospital. 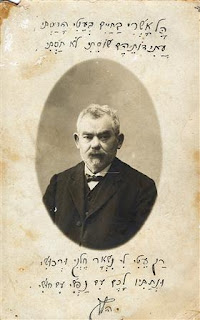