KHAYIM YELIN (April 1912-April 6, 1944)
He was born in Vilke (Vilkija), Lithuania.  His father was the director of the Kovno Jewish library, “Libhober fun visn” (Lovers of knowledge).  Khayim Yelin graduated from the Kovno Hebrew high school and later studied economics at Kovno University.  He was active in leftist circles in Lithuania.  When the Bolsheviks seized Lithuania in 1940, he became the administrator of a multilingual printing trust in Kovno and, until the German occupation, played an important role in local political life.  He debuted in print with a sketch in Folksblat (People’s newspaper) (Kovno, 1930), and he later published in the same paper stories, essays, and theater reviews.  He contributed as well to the Kovno literary publications: Oyfgang (Arise) in 1933, Brikn (Bridges) in 1937, Bleter (Leaves) in 1938, Naye bleter (New leavers) in 1939; and while the Bolsheviks were in control, Kovner emes (Kovno truth), Vilner emes (Vilna truth), and Shtraln (Beams [of light]), among others.  During the German occupation, he was the commander of the Jewish partisan organization.  He led an armed fight with the Nazis in other ghettos as well.  He was especially concerned with rescuing Jewish children from the ghettos into the forests and the partisans.  He was known as the heroic Vlaros.  On April 6, 1944, when he was recognized on a Kovno street by a Gestapo agent, he shot the agent and escaped over a fence.  When he was shortly thereafter surrounded by Germans, he cut his blood vessels so as not to fall into the hands of the Nazis alive.  A memorial volume for him was later published: Khayim yelin, der geto kemfer un shrayber (Chaim Yelin, the ghetto fighter and writer) (Tel Aviv: Igud Yotse Lita, 1975), 316 pp., which also includes his ghetto writings, Hebrew translation (1980). 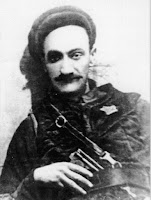