SHMUEL-YANKEV YATSKAN (1874-November 23, 1936)
He was born in Vabolnik (Vobol’niki, Vabalninkas), near Ponevezh (Panevezys), Lithuania.  He studied in religious elementary schools and yeshivas, and at age eighteen he received ordination into the rabbinate.  In his youth he was a wandering preacher and at the time published a short religious text Penine hayahadut (Pearls of Judaism) (Vilna, 1895).  At the beginning of the twentieth century, he was living in Ponevezh where he was running a “cheder metukan” (improved religious elementary school).  He then moved to Vilna and wrote a Hebrew monograph on the Gaon of Vilna; he later moved on to St. Petersburg where, in 1895, he began his journalistic activities for Hamelits (The advocate)—using the pen name “Avi David.”  In 1902 he settled in Warsaw, was a regular contributor to Hatsfira (The siren), edited by Dr. Rokhlson, and when the newspaper folded in 1905, he published an illustrated, humorous weekly entitled Di bin (The bee).  Together with N. Finkelshteyn, in 1906 he founded the first Yiddish penny-newspaper, Idishes tageblat (Jewish daily newspaper) which, both because of its inexpensive price and because it adapted itself to the tastes of the broad reading public, hit out at the more serious and more expensive Yiddish newspapers.  The newspaper also published Idishe vokhenblat (Jewish weekly newspaper) which devoted more space to journalism and fiction, with Hillel Tsaytlin as the principal contributor.  At the beginning of 1908, Yatskan and the brothers Noyekh and Nekhemye Finkelshteyn founded Haynt (Today), one of the most popular Yiddish daily newspapers, with a record circulation (for a Yiddish newspaper in Europe) of 100,000 copies.  Over the course of time, the editorial board of Haynt attracted the most prominent Yiddish writers, such as: Y. L. Perets, Sholem-Aleykhem, Sholem Asch, H. D. Nomberg, Dovid Frishman, and others.  In the later years of its existence, numerous authors of prose and poetry wrote works for the newspaper from a younger generation of writers in Poland.  From 1912 there was a daily supplement to Haynt entitled Der hoyz-doktor (The house doctor): “in the interests, life issues, and practical information in Warsaw” (altogether forty-two issues).  Under the headings, “Familyen-biblyotek” (Family library) and “Hoyz-biblyotek” (House library), the publisher of the newspaper brought out approximately one hundred pamphlets on popular science and historical themes.  From the emergence of Herzlian Zionism, Yatskan was a member of the Zionist Organization, and after the sixth congress he was a follower of the Uganda Program and also influenced Haynt at the time in the direction of territorialism.  The newspaper had great difficulties during WWI and afterward when Poland became an independent nation.  In June 1915 the newspaper was discontinued by the Tsarist military authorities; in August 1915, now under German occupation, it began once again to appear in print, but it was prohibited beyond the borders of Crown Poland.  After the departure of the Germans, it was again closed by the Polish authorities, and then resumed publication anew under the title Der tog (The day) in Warsaw (1919-1920).  In 1920 it merged with the daily Zionist organ Dos yudishe folk (The Jewish people), and then once again was closed by the Poles and again reemerged in print under the title Der nayer haynt (The new today).  A little later, it returned to its original title of Haynt.  In addition, Yatskan published and edited the weekly Di handels velt (The business world) in Warsaw (1921-1922), the weekly Velt-shpigl (World mirror) in Warsaw (1929-1939), the daily Parizer haynt (Parisian daily) in Paris (first issue: January 24, 1926), and the afternoon newspaper Hayntike nayes (Today’s news) in Warsaw (1937-1939).  He also published the Polish-language Jewish daily Piąta Rano (Five in the morning) in Warsaw (1936-1939).[1]  In 1921 he spent some time in the United States and published his memoirs in Morgn-zhurnal (Morning journal).  In brochure format in Yiddish, he published Gvald! oder an ernst vort iber dem hoyz-fraynd (Help!, or a serious word about Hoyz-fraynd [House friend]) (Vilna, 1894), 28 pp.—a pamphlet in opposition to M. Spektor’s Hoyz-fraynd.  In book form in Hebrew: Ḥinukh lanaar (Education for the youth) (Vilna, 1895); Rabenu eliyahu mivilna: ḥayaṿ, zemanav, korotav umifalav (Rabbi Elijah of Vilna: his life, his times, events in his life, and his writings) (Warsaw, 1900), 190 pp.  Together with Nisn Levin, he founded in Vilna the Yehudiya publisher house which brought out twenty volumes in the series “Folks-universitet” (People’s university).  He also published a translation by Rabbi Mortkhele (Kh. Tshemerinski): Makhzer af yidish (High Holiday prayer book in Yiddish).  He died in Paris and was buried in Warsaw. 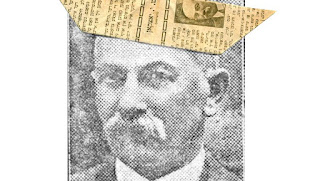 [1] Translator’s note. Some of these dates appear to be slightly off. (JAF)
Posted by Joshua Fogel at 07:52