MARKUS YAKUBOVITSH (MARCOS JACOBOVITCH) (May 16, 1897-1976)
He was born in Żyrardów, near Warsaw, Poland.  At age thirteen he became a laborer in Warsaw.  He spent the years 1913-1925 in Lodz, where he was initially active among the left Labor Zionists, later among the Communists, and accordingly he spent fourteen months in prison in Lodz.  In 1925 he moved to Brazil and for many years was president of the Association of Polish Jews in Rio de Janeiro, later settling in Porto Alegre where he worked as administrator and secretary of the local Jewish school.  He began writing with a humorous sketch in Haynt (Today) in Warsaw (1912), and from 1915 he was contributing humorous pieces, stories, poems, articles, and translations to: Haynt, Moment (Moment), and Radyo (Radio) in Warsaw; Lodzer folksblat (Lodz people’s newspaper) in Lodz; Der morgen (The morning) in Lemberg; Vilner tog (Vilna day) in Vilna, Parizer haynt (Paris today) in Paris; Morgn-zhurnal (Morning journal) and Forverts (Forward) in New York; Folksblat (People’s newspaper) in Montevideo; Yidishe prese (Jewish press), Yidishe tsaytung (Jewish newspaper), Der nayer moment (The new moment), and Porto-alegrer yidishe tsaytung (Porto Alegre Jewish newspaper) of which he was also editor—in Brazil; Idisher zhurnal (Jewish journal) in Toronto; and Di prese (The press) and Idishe tsaytung (Jewish newspaper) in Buenos Aires; among others.  He was also the correspondent for Warsaw’s Haynt in Brazil.  In book form he published: Tsurik, roman fun yidishn lebn in poyln, daytshland, brazil un yisroel (Return, a novel of Jewish life in Poland, Germany, Brazil, and Israel), 3 parts (Buenos Aires: Yidish Porto Alegre, 1959-1960), 429 pp.  His poetry and couplets were recited on stage in Poland, Argentina, and Brazil.  He reworked a series of plays for children which were performed in Jewish schools in South America.  He also wrote under the names: Motele, Dr. Shekhor, M. Yavitsh, Maria, Dr. Aristoteles, Ben-Yisroel, Ele-meylekh, Dr. Izraelzon, and the like.  He died in Israel. 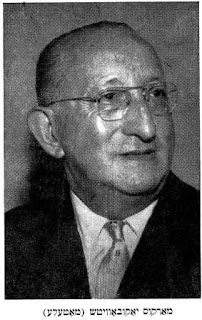