GERSHON YAKOBSON (JACOBSON) (May 30, 1934-May 29, 2005)
He was born in Moscow, Soviet Russia.  In his Hassidic home, he received a religious upbringing and in the government school a revolutionary secular education in the Communist spirit.  He graduated elementary school and middle school with distinction in literature, history, geography, and mathematics.  He left Russia for Poland and, after living in Czechoslovakia, Germany, Austria, Italy, Switzerland, and Canada, he settled in the United States in late 1953.  In 1949 he debuted in print with a short story in the Russian journal Posev (Sowing), which was published in Munich by emigrés from Soviet Russia.  He contributed to Russian newspapers in France and West Germany.  He wrote articles, reportage pieces, and features.  He was a traveling correspondent for the daily Maariv (Evening) in Tel Aviv, and he wrote articles and stories for Yiddish newspapers in Israel, South America, and France.  Several of his stories appeared in Kiem (Existence) in Paris.  For three years he served as chief of the news bureau of the English-language Jewish weekly, National Jewish Post.  He contributed as well to the Jewish Chronicle in London, Keneder odler (Canadian eagle) in Montreal, Idishe zhurnal (Jewish journal) in Toronto, Yediot aḥaronot (Latest news) in Tel Aviv, and Tog-morgn-zhurnal (Day-morning journal) in New York.  Among his pseudonyms: Gershon Gruzin, G. Ben Yankev, Gershon Ber, and Boris Moskovski.  Since 1972 he has been the publisher and chief editor of Algemeyne zhurnal (General journal) in New York.  He was last living in Brooklyn where he died. 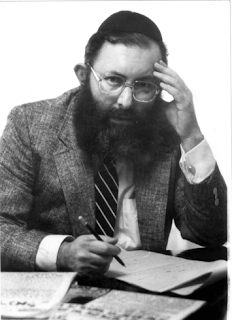