SHMUEL (SEFOG) TSHERNOVITSH (SAMUEL TCHERNOWITZ) (December 13, 1879-July 30, 1929)
He was born in Sebezh, Vitebsk district, Byelorussia.  He was the brother of “Rabbi Tsair” (Khayim Tshernovitsh).  He studied at the Kovno yeshiva.  He was early on drawn to the Zionist movement and served as secretary to the Zionist “delegates” in Vilna and Vitebsk.  In 1903 he settled in Warsaw and began writing for Hatsfira (The siren) under the pen name “Sefog” (sponge), also becoming secretary of the publisher “Tushiya.”  Over the years 1904-1906, he served as a member of the editorial board of Hazman (The times) in Vilna.  From 1910 he was back in Warsaw and again involved with editorial work on Hatsfira.  Those years he was also writing for Yiddish publications, such as: Di velt (The world) in Vienna (1900-1901); Der tog (The day) in St. Petersburg (1904); Yudishe tsaytung (Jewish newspaper) in Vilna (1909); Di yudishe vokh (The Jewish week) in Warsaw (1912); and Yidishes tageblat (Jewish daily newspaper) in New York.  With the outbreak of WWI in 1914, he left for Russia, lived in Pinsk, and later he was in Moscow and Omsk (Siberia), where he turned his attention to business.  After the revolution in 1917, he made his back to Moscow where he contributed (and for a time edited as well) the weekly newspaper Haam (The people).  In that same year, he traveled to Kiev and (together with Yoysef Shekhtman) brought out the weekly newspaper Dos idishe folk (The Jewish people).  In 1921 he again moved to Warsaw, wrote for Hatsfira, Haynt (Today), and Moment (Moment).  In 1922 he moved to the land of Israel.  He was secretary of Vaad Haleumi (Jewish National Council).  He later visited Poland, Lithuania, and Latvia, and after returning to Israel he became an officer in the Jewish National Fund.  He served as a correspondent from Israel to Moment in Warsaw with a weekly letter “Erets-yisroel in zibn teg” (The land of Israel in seven days) and to Tog (Day) in New York.  His books include: Der politisher tsienizm, a popularishe erklerung (Political Zionism, a popular explanation) (Warsaw: Fraydzon, 1902), 50 pp.; Dr. benyomen zev hertsl, zayn lebn un virken (Dr. Benjamin Zev Herzl, his life and its impact) (Warsaw, 1904), 24 pp.; Fir briv tsu mayne brider in goles (Four letters to my brother in the Diaspora) (Warsaw: Jewish National Fund, 1927), 64 pp.; Unzer arbet in erets-yisroel in likht fun faktn un tsifern (Our work in the land of Israel in light of facts and figures) (Warsaw, 1927), 30 pp.  He was also the author of the Hebrew monograph on the Zionist order Bene moshe utekufatam (The sons of Moses and their times) (Warsaw, 1914), 172 pp. 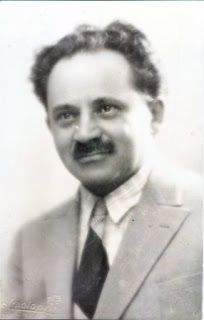