ADAM TSHERNYAKOV (CZERNIAKÓW) (November 30, 1880-July 23, 1942)
He was born in Warsaw, Poland.  He studied engineering at the Warsaw and Dresden polytechnic institutes.  Over the course of thirteen years, he gave lectures in the vocational school of the Warsaw Jewish community.  During WWI he joined the Jewish artisans’ union in which he fought for the rights of Jewish tradesman and against instituting guild laws in Poland.  From 1919 he was involved in the Jewish reconstruction, and under his supervision two trade union schools were built in Brisk (Brest) and Pinsk.  When the folkists wished to take over the artisans’ union, he stood at the head of the impartial group, and to that end founded and edited Di fraye hantverker-shtime (The free voice of artisans) in Warsaw.  He also contributed to: Yubileum almanakh fun yidishn hantverker (Jubilee almanac of the Jewish artisan) of 1924, for which he wrote several scholarly trade works; Idishe hantverker tsaytung (Jewish artisanal newspaper) of 1925-1930; Hantverker- un industry-tsaytung (Vocational and industrial newspaper) of 1925-1934; and other serials in Warsaw.  He also published the pamphlet: Dos tsekhn-gezets (The guild law) (Warsaw, 1925), 43 pp. and 3 pp.  He was elected to the Warsaw city council in 1929 and served in the Polish senate in 1931.  Before WWII he was vice-chair of the Warsaw Jewish community administration.  In September 1939, when the community’s chairman, Maurycy Meisel, left Warsaw with the general tide, Czerniaków became the actual chairman of the Warsaw Jewish community administration.  With the German occupation of Warsaw, he was selected by the Germans initially for the Ältesten der Juden (Jewish elders) and later to be leader of the Judenrat (Jewish council).  When the ghetto in Warsaw was created, he with assistance from responsible Jewish leaders successfully reorganized the activities of the Judenrat.  In May 1941 the Germans picked him to be in charge of the Jewish quarter.  On July 22, 1942, when the Germans handed over to him the order to deport masses of Jews from the ghetto, he committed suicide so as not to have to carry out this order. 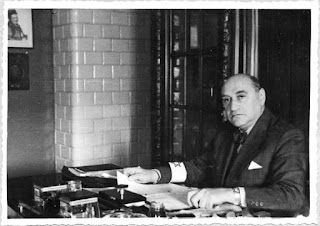