PAUL (PINKHES) TREPMAN (October 20, 1916-1987)
He was born in Warsaw, Poland.  He studied in the Tachkemoni rabbinical seminary in Warsaw and later at Vilna University.  During WWII he lived for a time on the “Aryan side,” later in a concentration camp.  He was liberated after the war.  He was a member of the central committee of liberated Jews in the British zone in Germany.  From 1948 he was living in Montreal, Canada.  He was teacher in a Jewish public school.  He was director of “Undzer kemp” (Our camp) in Préfontaine.  He began writing in 1945 in the weekly newspaper Undzer shtime (Our voice) in Bergen-Belsen, later publishing articles in Vokhnblat (Weekly newspaper) also in Bergen-Belsen, Undzer veg (Our way) in Munich, Dos vort (The word) in Paris, Keneder odler (Canadian eagle) in Montreal, and Di prese (The press) in Buenos Aires.  In book form: A gesl in varshe (An alley in Warsaw) (Montreal, 1949), 132 pp.; Among Men and Beast (South Brunswick, 1978), 229 pp.  He also published under such pen names as Pinkhes Batlen and P. Tsharnes. 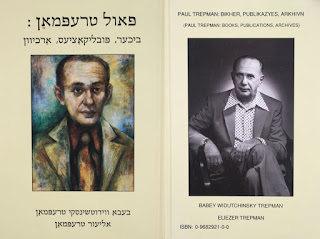